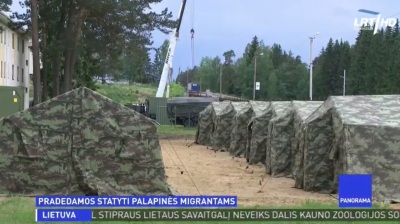 Vilnius has begun to use guarded army training camps to house refugees.
By Linas Jegelevicius in Vilnius August 6, 2021

Lithuania, a country more used to emigration than immigration, is experiencing an unprecedented influx of migrants this summer, pushing the Baltic state’s centre-right government into taking measures that have raised tensions with neighbouring Belarus and brought criticism from human rights groups.

As of August 4, some 4,000 irregular migrants – most of whom are Iraqi – have been caught after crossing the 670-kilometre Lithuanian-Belarusian border, compared to 81 in the whole of 2020.  Lithuanian Interior Minister Agne Bilotaite says the number of irregular migrants arriving in Lithuania may reach 10,000 by the end of the year.

Lithuanian and European Union officials say the migrant flows are being orchestrated by Belarus’ authoritarian leader Alexander Lukashenko in retaliation for EU sanctions over his government's crackdown on the opposition following the rigged presidential election nearly a year ago. Vilnius has been in the vanguard of the European measures against Belarus and has become the headquarters in exile of opposition leader Svetlana Tikhanovskaya.

Vilnius says Belarus has been encouraging airlines from countries with refugees such as Iraq to fly to Minsk and is allowing their passengers to enter with tourist issues. It has also published a video taken from a helicopter showing Belarus border forces apparently directing the migrants towards the border.

Belarus denies this, and has accused Lithuania of being responsible for the reported death of an Iraqi migrant on the border, a charge Lithuanian Defence Minister Arvydas Anusauskas was quick to dismiss as a “provocation” and part of Belarus’ “hybrid warfare” against its neighbour.

In the past Lukashenko has openly threatened the EU, saying in May that "we were stopping migrants and drugs – now you will catch them and eat them yourselves".

The EU has been involved in negotiations with Baghdad in an effort to convince Iraq to cut the number of flights to Minsk. On August 4 it said flights would be suspended for 10 days. Brussels and Vilnius are also asking for help returning Iraqi citizens – who have crossed the border irregularly into Lithuania – to their country of origin.

The government has begun building a concertina wire fence to stop the migrants from entering, using 100 kilometres supplied by neighbouring Estonia.

Interior Minister Agne Bilotaite discussed this week the situation with European Commissioner for Home Affairs Ylva Johansson during their meeting at the Border Guard School in the border town of Medininkai. The Commissioner agreed that that Lithuania needs a physical barrier on its border with Belarus, though it cannot fund it with EU money.

Lithuania may have won the backing of the EU and its neighbours but human rights groups have accused it of breaching its international obligations to treat refugees decently.

Vilnius has begun to use guarded army training camps to house refugees and, most controversially, Bilotaite announced on August 3 that she has allowed border guards to push migrants illegally crossing the Lithuanian-Belarusian back to Belarus and divert them to border checkpoints or diplomatic representations. Reportedly, the first batch of 180 undocumented migrants has already been pushed back to Belarus, a move that, some analysts say, could spark tension at the border.

Push backs – when refugees and migrants are forced back over a border, without consideration of their individual circumstances and without any possibility to apply for asylum or to put forward arguments against the measures taken – violate  the prohibition of collective expulsions stipulated in the European Convention on Human Rights.

The Lithuanian parliament also passed a law last month that bans any release of migrants from detention for six months after their arrival, curbs the right of appeal for rejected asylum-seekers and stipulates that migrants can be deported while their appeals are considered. The new law removes most rights accorded to migrants such as the right to a translator or to obtain information about their status and the asylum process.

“The law is a potential human rights violation, and it does not correspond to EU directives,” Lithuanian Red Cross programme director Egle Samuchovaite told Reuters. “It enshrines the current bad situation in Lithuania’s detention centres in law and leaves vulnerable people in an even more vulnerable situation.”

Some voices are calling for Lithuania to go even further and abandon its commitments to look after refugees.

“I believe Lithuania has no other choice than keep accepting migrants,” Gediminas Girna, former director of Lithuania’s State Security Department, told bne IntelliNews. “But what the authorities have to do swiftly next is revise Lithuania’s commitments to international migration-related treaties and agreements. When signing them, Lithuania could not even imagine the situation it has now”.

Some opposition politicians have accused the government of taking panic measures that have whipped up domestic fears.

“The ruling Homeland Union-Lithuanian Christian Democrats are using aggressive, belligerent rhetoric since the beginning,” Juozas Olekas, a Social Democrat Lithuanian MEP, told bne IntelliNews. “Just listen to what words they are using now: a ‘war’, ‘a hybrid war’, ‘tension’ and so on. I dare to say that that way they are trying to conceal their inability to make right decisions – their incapability is obvious. It is regretful that they do that, burdening their own citizens and mulling restricting certain human rights – not only those of migrants but their own citizens too,” the MEP said.

Alarmed by the migrant crisis, the Lithuanian government has declared a national emergency, which “constitutes” a breach of the constitution and damages democracy, Olekas maintains.

“Get me right – what is happening at the border does create a problem, but it is not tragic and is not out of control. I am sure the state of Lithuania can handle it on its own. Many other southern European Union countries have been dealing with illegal migration for years and do not ring alarm bells on every occasion,” Olekas argues.

The government’s alarm over the migrant influx has arguably played a part in stoking tensions in the border municipalities – all of which have declared local-scale emergencies on top of the national emergency and have called on the central government to earmark more money to tackle issues stemming from the appearance of the unexpected guests.

Local opinions are “mixed”, says Lithuanian police deputy commissioner general Arunas Paulauskas when asked about the situation in the settlement of Rudninkai in south-eastern Lithuania where the authorities are planning to house some 1,500 irregular migrants. Recently, a group of protesters blocked a road to the site in the settlement, leading to scuffles with the police.

“We have to admit that outside provocateurs are “stoking” anti-migrant sentiments,” the police chief emphasised.

Even some MPs from the ruling Lithuanian bloc, such as Kestutis Masiulis, have called for calm and played down “the darkest scenario” of the migrant influx.

“It is preposterous to think that it will annihilate us or the state…Europe deals with migration daily. The numbers of undocumented migrants we see in Lithuania now is a daily routine in Southern Europe, yet the situation is under control there…But the exhortations to shoot, gas and beat migrants with batons and wage other means against them – something we see teeming on the social media – is totally inacceptable. What can happen at worst [in the situation] is to us is allow somebody to wedge a splinter between Lithuania and our partners in the West,” Masiulis told bne Intellinews.

With Lithuania seemingly unable to stop the influx for now, Ramunas Karbaukis, leader of the opposition Lithuanian Farmers and Greens Union (LFGU), has called on the government to start talks with Minsk to resolve the crisis.

Foreign minister Gabrielius Landsbergis immediately slammed the proposal: “Entering into negotiations with the terrorist [Lukashenko] would mean giving him more space [to act]. A nonsense!”

When approached by bne IntelliNews, the LFGU leader insisted he supports “stern” rhetoric with Minsk, but noted that the Lithuanian government has so far chosen ineffective means of diplomacy and he argued that it has not yet “involved” the EU institutions, leaders of EU member states and leaders of other countries in solving the crisis.

“I personally believe the rhetoric the Conservatives used in dealing with Minsk since the beginning was too harsh, pugnacious, short-sighted and – we see that now – even damaging … I believe Minsk should be reached out through the European Union institutions. Look: even at a time of war, the sides retain certain contacts. Like for example in the case of Afghanistan.  The best mediator between Lithuania and Belarus would certainly be the European Union or the Commission,” Olekas told bne IntelliNews.

The conscripts, generally Tajikistan’s poorest young men, are brutalised into service. And they are the country’s first line of defence.