Tension on Belarus-Poland diminishes, but refugees not out of the woods yet 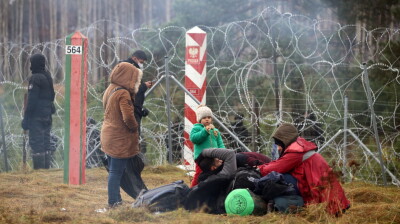 Following the fighting on Wednesday, the situation on the Polish-Belarusian border was much quieter on Thursday as a large number of refugees moved into a nearby warehouse to escape the dropping temperatures, and talks on resolving the crisis are intensifying.
By Ben Aris in Berlin November 19, 2021

Tensions on the Belarus-Polish border have diminished as the first 500 refugees were flown home and most of the remainder were moved to a warehouse for food and shelter, but hundreds remain in the camp in the woods by the fence as night closed in on November 18.

The crisis came to a crescendo on November 16, when hundreds of mostly young men tried to storm the border, only to be met with the Polish security force’s stun grenades, water cannon and tear gas. A fierce battle raged for about an hour until the migrants were beaten back and finally defeated.

The next day Belarus' President Alexander Lukashenko talked with German Chancellor Angela Merkel for the second time in three days, demanding the EU recognise his presidency and revoke the four rounds of sanctions imposed so far.

However, Merkel, who has long experience of brokering peace deals in Eastern Europe, seems to have placated the one-time communal farm manager as tensions subsided in the next 24 hours.

An Iraqi plane arrived from Baghdad to take the first load of migrants home. A large proportion of the migrants left the forest camp and moved into a dry and warm warehouse, where they were given hot food and a bed. And Belarusian security forces moved the forest camp back from the fence and prevented any more attempts to storm the border.

While tensions remain high, the numbers of migrants actually on the border has been greatly reduced and the Belarusian security forces seem to be actively de-escalating the tensions, whereas there were previously reports of some officers actively directing the assaults on the Polish border.

The crisis now seems to be moving towards an end-game as all sides look for some face-saving way to withdraw, barring fresh surprises.

The Belarusian authorities had already opened up a nearby warehouse to accommodate hundreds of refugees the night before to shelter from the increasingly cold nights. They were given bedding, blankets and hot food. As the sun set on November 18 the majority of the refugees had moved into the warehouse. Social media – as much as it is possible and if they wish – returning the 5,000 others to their homes,"

Speaking separately in Warsaw, German Interior Minister Horst Seehofer also firmly put down any rumours that Germany would take in the 2,000 migrants. He said that he had immediately asked Merkel for confirmation and was told that it is “fake news.”

One possible reason for the de-escalation and the more accommodating tone by Belarus is that the crisis appears close to backfiring for Lukashenko.

A large part of Lukashenko's motivation for causing the crisis in the first place was as a propaganda stunt, where he was hoping to portray the EU as brutal and adhering to double standards, something the Polish police use of stun grenades and water cannons reinforced, and himself as the benevolent and compassionate leader.

However, an online poll conducted in Belarus on November 17 showed that only 36% of the respondents said they had “compassion” for the plight of the refugees, with the rest seeing the crisis as more evidence of Lukashenko's heavy-handed abuse of innocents for his own political gain.

Moreover, the whole border clash had been threatening to run out of control as the refugees became more organised and less easy to control by the Belarusian security forces on the ground as they became more desperate in the deteriorating conditions.

Relations with Russia were becoming strained as well. On November 16 Lukashenko threatened to shut down the Yamal-Europe gas pipeline, a key gas pipeline transiting gas from Russia’s Arctic regions to Poland and then Germany. Gas prices on the Dutch exchange immediately spiked from around $800 per thousand cubic metres to around $1,200, exacerbating the ongoing energy crisis.

However, the Kremlin quickly slapped down Lukashenko, saying such a move would “damage” Russia-Belarusian relations and that the pipeline would not be closed as Russian energy giant Gazprom has a “contractual transit obligation” that it has to meet.

The next day Belarus announced the less important Polish section of the Druzhba oil pipeline would be closed for three days for unscheduled maintenance work. Europe’s supply of oil is plentiful and oil is mostly transported by ship, not by pipeline, so shutting off the oil duct is unlikely to cause much inconvenience.

However, even that move was short-lived. On November 18 less than 48 hours after the pipeline was turned off the Russian oil pipeline operator Transneft said the repair work had been completed and the pipeline was back in action.

Also on November 18 Belarus said it would cut off power deliveries to Ukraine. This is a much more serious threat, as Ukraine is on the verge of an energy crisis. As bne IntelliNews has reported, the state-owned and operated power stations have started to run out of coal and some of them have been turned off due to the lack of fuel. Ukraine’s nuclear power stations do not have the capacity to make up the shortfall. Last winter Ukraine and Lithuania ended up importing record amounts of power from Belarus’ new Ostrovets (aka Astravets) power plant, which will remain a key source of power for the country this winter and is also one of the main points of leverage Lukashenko has over the EU in the current standoff.

Russia has been adding to the pressure on Ukraine by refusing to export coal to Ukraine to fuel its power plants as well as blocking delivery of coal to Ukraine from Kazakhstan.

Warsaw added its voice to the clash on November 18 by demanding that Minsk stabilise the situation by November 21, otherwise it will close the Kuznitsa railway checkpoint and effectively cut the country off from European imports.