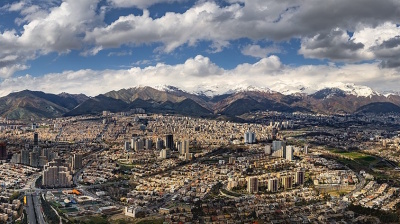 Tehran has changed the name of a park and 38 public thoroughfares.
By Javid Agha in Baku November 25, 2021

Tehran City Council on November 23 adopted a law changing the names of a park and 38 public thoroughfares in the Iranian capital, including renaming some streets after Azerbaijani towns and regions in a way that is bound to antagonise Baku.

Two name changes in particular are expected to spark reactions from Azerbaijani authorities. The municipality is to change the name of Panah Alley to Nardaran. The namesake of the new street is a village on the outskirts of Baku, known for its strictly religious Shiite community and home to The Muslim Unity Movement, an unregistered religious group formed in 2015.

The founder of MUM, an Iran-educated Azerbaijani Shiite scholar Taleh Bagirzade, has been a vocal critic of the positions of state religious bodies and has accused the government of authoritarian rule and corruption. He has been particularly vocal in condemning the ban on headscarves in schools. Taleh Bagirzade, and 16 other members of MUM, were arrested following a security raid by police and other security forces in Nardaran on 26 November 2015.

According to the Azerbaijani Ministry of the Internal Affairs, the arrests were conducted to neutralise "an armed criminal group acting under the cover of religion and planning to commit acts of terrorism". The clashes between the police and the suspects during those operations resulted in six deaths, including the deaths of two police officers.

Iranian authorities have been vocal about the Nardaran case: "The situation of Nardaran's people is very worrying. The government of Azerbaijan accuses the Islamic republic of having a hand in the unrest, while the Islamic republic has always adhered to good neighbourly ties with this country," Ayatollah Mohammad Mojtahed Shabestari, the leader of Friday prayers in Tabriz, said in 2015. Several Iranians organised demonstrations in front of Azerbaijani consulates and embassies in Iran.

The most controversial choice was the naming of Maryam alley as Shushi, the city retaken by the Azerbaijani Armed Forces on 8 November, during the Second Nagorno-Karabakh War. The traditional and official Azerbaijani name for the city is Shusha, while the city council chose to go with Shushi, the Armenian name for the town. Historically, it is known to be the place where Iranian shah Agha Mohammad Khan Qajar was murdered. He was killed a few days after claiming the city from local Karabakh khan Ibrahim Javanshir.

According to the law, Baradaran St. in the area of ​​District 6 of Tehran, between Nezami Ganjavi St. and Rastegaran, will also be changed to Badkoobeh, a former Persian name of the city of Baku, the Azerbaijani capital. Doostan street in the same district between Sarvan and Bustan streets will be changed according to the name of another capital of the South Caucasus region, Tbilisi, capital of Georgia. The Golestan alley in the same district will be named Abkhazia, while Payvand will be Ganjeh, the second biggest city of Azerbaijan – also the birthplace of Persian poet Nezami Ganjavi, a 12th-century poet who is regarded as a national poet by Azerbaijanis as well as Iranians. Aliyev declared 2021 as "Nezami year" in Azerbaijan on the occasion of the poet's 880th anniversary.

Other name changes include Yas Alley to Salyan and Ehtesham Alley to Lankaran – two southern districts of Azerbaijan, the latter having a considerable Talysh ethnic minority, who speak a language belonging to the Iranian group. Lankaran is also the city Grand Ayatollah Mohammad Fazel Lankarani (1931-2007) hails from. Chaman Alley will be renamed Aran, a region located in the central area of Azerbaijan. Being an ancient Persian name for Caucasian Albania, a kingdom of antiquity whose borders reached roughly to modern Azerbaijani borders, its modern use by Iran is considered more political. Enayatollah Reza (1920-2010), an Iranian historian, defended calling the modern state of Azerbaijan "Aran" in order to distinguish it from Iranian Azerbaijan, a region with a considerable Azerbaijani population in Iran.

While there has been no reaction as yet by authorities of the South Caucasian countries, Salar Seyf, an Iranian journalist said in a tweet that the need for the renamings was "because they belong to the realm of the Iranian civilization" and hoped that "no one will call the city council tomorrow to remove these names".

Besides city names, some streets were named after Iranian Armenians such as Rostom Voskanian (1932-2013) and Vartan Hovanessian (1896-1982).

Iran and Azerbaijan have had difficult relations since the Second Karabakh War that ended late last year, with Iran accusing Azerbaijan of harbouring terrorists as well as Israeli forces, and Azerbaijan introducing a road toll aimed at Iranian trucks using a route to supply either Armenia or the ethnic Armenian-controlled Karabakh territories.

Azerbaijani President Ilham Aliyev expressed his displeasure at Iranian military exercises held near the Azerbaijani border on September 27. Although the foreign ministers of Iran and Azerbaijan later said they had reached an understanding, the Tehran City Council's move with the renaming exercise may be poised to raise tensions anew.