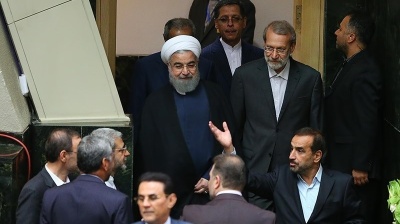 It has come to something when the sight of UK PM Boris Johnson in a May 2018 interview talking up Donald Trump’s chances of a Nobel Peace Prize can surely only prompt howls of derision, while news that the Iranian judiciary is applauding a Baghdad judge’s granting of an arrest warrant for the US president has the ring of credibility. But such was the situation on January 7 as the world came to terms with the reality that the so-called leader of the free world had incited a mob that went on to storm and rampage through the Capitol in Washington, DC, supposed to be a beacon for the cause of democracy around the world.

The theocrats that hold sway over Iran surely struggled to contain their laughter and schadenfreude at the sight of America’s shabby fall from grace. “What we saw in the US last night and today really showed first how brittle and weak western democracy is, and how weak its foundations are,” said the Iranian president, Hassan Rouhani, in a speech broadcast on state television.

Describing Trump as an “unhealthy person”—something that he has in fact been saying for the past three years during which time Trump’s sanctions have crushed much of the Iranian economy and millions of ordinary Iranians into the ground—Rouhani also remarked that the US leader and the “calamities” of his “populism” had “blemished the dignity and reputation of his country” and that “he disrupted US relations with the entire world”.

Strong position ahead of Biden talks

The Iranians are now expected to enter talks with the incoming Joe Biden administration to get Trump’s sanctions lifted. And one might say, given events, they start from a strong position. They will argue that Trump in May 2018 (that’s right, the very month Johnson gave said interview) against all diplomatic convention unilaterally walked out of a multilateral agreement—the nuclear deal, or Joint Comprehensive Plan of Action (JCPOA), signed by Iran, the US Obama administration, the UK, France, Germany, Russia and China in late 2015—when Tehran was in full compliance with it, as evidenced by UN inspectors. And they will contend that Biden is in no position to demand Iran agree new concessions in return for a US re-entry into the pact, drawn up to guarantee the Iranian nuclear programme stays entirely civilian in return for a shield against heavy sanctions. Arguments from Biden that the US, stepping forward as the world’s sole superpower, is in principle entitled to new concessions in the pursuit of Middle East peace and stability may fall a little flat.

Perhaps demonstrating how strong they believe their position has become, the Iranians on January 6 demanded that as a prerequisite for a return to the JCPOA status quo, the US should pay Tehran as much as $70bn in compensation for oil revenues lost due to Trump’s sanctions. The demand was relayed by Kamal Kharrazi, chairman of Iran’s Strategic Council on Foreign Relations, a body that advises the supreme leader of the Islamic Republic, Ayatollah Ali Khamenei.

The US foreign ally perhaps most aghast at unfolded developments is Israeli Prime Minister Benjamin Netanyahu, a politician who has backed Trump to the hilt. On January 7, Axios reported Israeli government sources as saying that Netanyahu was demanding full control of Israel's Iran policy as Biden prepares to assume the Oval Office, setting off a fierce fight with the more moderate Israeli Defence Minister Benny Gantz, Foreign Minister Gabi Ashkenazi and the heads of Israel's security services. Gantz reportedly responded in a letter to Netanyahu that “the issue of security and mainly the Iranian file are not the personal business of just one person".

For the past few weeks there has been intense speculation that Netanyahu and Trump have been pushing for a military strike on Iran in the waning days of the latter’s presidency.

Ryan Grim, the DC bureau chief at The Intercept, on January 5 told Hill.TV’s “Rising” that experts believed that Trump wanted to hit Iran with a military attack on his way out from the White House, but his aides were advising against it.

“There is a belief among people following this that Trump wants to strike Iran and has been actually attempting to execute on that desire over the past week or two,” Grim said. But the attempt, he added, was “being thwarted by people around him, who recognise that this is just an expression of some kind of lingering resentment toward [predecessor Barack] Obama and the Iran deal and is in no way in the US national interest.”

Petrostates to lose trillions of dollars in revenues amid clean energy push: report