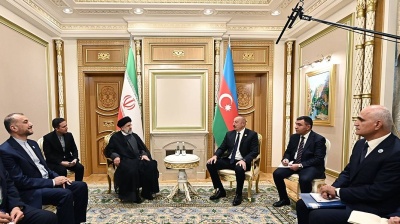 Tensions between Tehran and Baku are spiralling into dangerous territory. Don’t let the public messages of support for each other made on the occasion of the anniversary of the Second Nagorno-Karabakh War fool you.

In a scathing editorial written by university lecturer and diplomat Ehsan Movahedian for a magazine linked to the Iranian Foreign Ministry, President of Azerbaijan Ilham Aliyev is referred to as a “political dwarf”. Movahedian pummels the leader of Iran’s neighbour by outlining extensive detail of alleged previous transgressions as a devotee of gambling.

Tehran and Baku are increasingly upset with each other over the long-debated history and status of areas of Iran dominated by the substantial Azerbaijani ethnic minority and arguments over a trade corridor Azerbaijan wants to establish across Armenian territory parallel to the Iranian border. The corridor might pose something of an obstacle to Iranian traders accessing Georgia and beyond that Russia via Armenia. It would also stamp more Azerbaijani influence over an area Iran sees as its backyard.

Tehran has been launching verbal attacks on Azerbaijan for what it perceives as Baku's stoking of sectarian tensions in primarily ethnic Azerbaijani areas of Iran in cities like Ardabil and Tabriz during the eight weeks of nationwide anti-regime protests Iran has endured. Iran has, for instance, pointedly claimed that a lone gunman’s murderous attack on a shrine in Shiraz during the protests, since claimed by a regional offshoot of Islamic State, were directed from Baku, with security officials saying one of the attackers in the terrorist team behind the atrocity flew in from Heydar Aliyev Airport.

Centuries ago—before Russia invaded what were then statelets of former Qajar Iran —Azerbaijan, Armenia, Georgia and Dagestan were once the northern reaches of the Safavid empire. However, incompetence of historical proportions shown by Iran’s Azeri Qajar kings and an upwardly mobile Russian Tsarist empire that was on the warpath, meant the gobbling up of the territories. The border was ultimately forced back to the Aras River, where it remains today. The humiliating treaties of Turkmenchay and Golestan had to be signed, much to Iran’s upset.

To this day, Iranians of all stripes moan about how utterly stupid the Qajar were for losing the territories. The Azerbaijanis, the northern neighbours to Iran, however, while reluctantly acknowledging the historical ties to Iran, do not see themselves as “Iranians”, a point that falls on deaf ears when it comes to the authorities in Tehran, despite the more than 150 years of Russian and Soviet governance that intervened.

Following the collapse of the Soviet Union, the three countries that we now refer to as making up the South Caucasus, sought independence from Moscow. From then until relatively recently, they have not figured much in the minds of Iranians. However, since 2015, and Iran’s push to decouple from trade with traditional trade partners to protect itself from further Western sanctions, much of Tehran’s influence and interest has shifted northwards. This northern strategic trajectory has rekindled a fascination among many in the country with the Caucasus, for the words “Turkmenchay” and “Golestan” are burnt into their subconscious. However, a lot has changed in two centuries.

A growing cohort of Iranians from liberal and conservative factions, from Islamic Republican to Royalists in Los Angeles, explode with fury when talk of meddling with Iran’s contemporary borders comes into play. Azerbaijan, with its population of 10mn versus Iran’s 85mn, may not seem like a direct threat to its big neighbour, but the small country in the north has managed to irk the sense of security of many inside Iran’s security circles, who are nursing wounds from dealing with the many weeks of protests that continue to roil the powers that be.

Azerbaijan and its “brother ally” Turkey have on several occasions hinted at reunifying what they see as a a portioned off part of the Turkic world inside Persian Iran. While Iran on the other hand continuously talks of the northern “breakaway” countries “playing with the lion’s tail,” a reference to Iran’s Royal Imperial past.

Movahedian in his article, and later on in an IRIB television interview, said Azerbaijan’s leader Aliyev was “taunting” Iran during live broadcasts of war anniversary events in Shusha in Nagorno-Karabakh.

The Aliyev words referred to by Movahedian were delivered at a November 8 event, where Azerbaijan's leader, with recent Iranian war games on the border with Azerbaijan in mind, said, “If necessary, we will show it again, we will achieve what we want, everyone knows this, and those who conduct military exercises in support of Armenia on our border should also know this. Nobody can scare us.”

“Aliyev has taken a dangerous gamble this time and implicitly threatened Iran with a military attack,” the diplomat wrote.

“He, who is a gambler who always loses, has forgotten that in his youth, when he had no money, he lost two million dollars in a gambling house in Istanbul, and even Necmettin Erbakan [the former Turkish prime minister] refused to help him; it was Iran that came to his aid.”

Movahedian concludes that the Aliyev family, including Ilham Aliyev’s late father and predecessor as president Heydar Aliyev, are not “grateful” for the love and magnanimity of the Islamic Republic of Iran, and have “forgotten that if it were not for Iran's help in the first Karabakh war, Armenia would have advanced to Baku.”

Movahedian continues that “they would have all returned to Tabriz as refugees”.

In an outright bizarre claim, Movahedian goes on to say that the young Aliyev once had to have Tehran pay for some suits tailor-made for him as he had no money. He then damns the Azerbaijani army for being weak compared to the “flood” of Iranians, while also saying it would cost Tehran less than $100,000 to invade and occupy Baku.

In a final heated statement, Movahedian said that “Aliyev has opened the gates of hell” with his childish and rude actions and that the dark days are awaiting him. Without leaving much to the imagination, he talks of how Iran’s 2001 military response to defend its interests in the Caspian Sea would be repeated on a much larger scale (back then, an Iranian warship and fighter plane threatened a BP vessel exploring for oil in waters claimed by Azerbaijan; by then, the ailing Heydar Aliyev was too ill to respond.)

This is not the first time Iran has turned on Azerbaijan. As time has progressed and the détente between the two capitals has continued to wither, other extraordinary statements have been made by the clerical leadership in Tehran.

“Heydar Aliyev was from the KGB. He told us that he was a KGB spy in Tehran, he was cleaning shoes in a corner of Tehran, he was a shoe-shine specialist. And he said it with pride, that is, he wanted to show that he knows Iran, that he knows Tehran and Iran quite well,” remarked Ahmad Hosseini Alas, former head of the Azerbaijan Department of the Organisation of Cultural and Islamic Relations of Iran in October last year.

TEHRAN BLOG: There’s no revolution on the horizon, but something has broken

TEHRAN BLOG: Will the protests be crushed or could the Islamic regime fall?

TEHRAN BLOG: Dizzying descent of rial gives rise to ‘Farzin & Khandoozi’
TEHRAN BLOG: There’s no revolution on the horizon, but something has broken
TEHRAN BLOG: Will the protests be crushed or could the Islamic regime fall?

Reflections from our correspondents on the ground in the Iranian capital.