Ex-Georgian president and Odesa’s new governor Mikheil Saakashvili says he and former colleagues in the 2004-13 Georgian leadership have been tasked with “making the impossible possible” in Ukraine by President Petro Poroshenko. As the economy collapses, entrenched corruption infects the administration and saps morale, and military conflict simmers across the country’s shattered industrial heartlands in the East, the task is taking a toll on ‘Team Georgia’.

Health minister Oleksandr Kvitashvili recently walked away from what he found to be a mission impossible. Others in the group remain intent on turning Ukraine around, even if it means throwing away the rulebook. bne IntelliNews takes a look at the key players on the Georgian-Ukrainian field.

Saakashvili has set himself up as Ukraine’s prime minister in waiting. The limited powers of a regional governor will not satisfy a former national president for long, and with Yatsenyuk's grip on power shaky as his approval rating plummets to 3%, Saakashvili is grandstanding with an eye to the greater post.

"Even if we manage to stop the ruin and collapse and develop normally, then only in 20 years will we reach the level of [the era of ousted Ukrainian president Viktor] Yanukovych in terms of economic indicators," Saakashvili declared at a public meeting in Odesa on June 16, laying out his credentials for the job of PM. “We need to do something absolutely extraordinary to prevent this. It should be a Ukraine that will develop in leaps and bounds, to escape from this pit and jump ahead.” 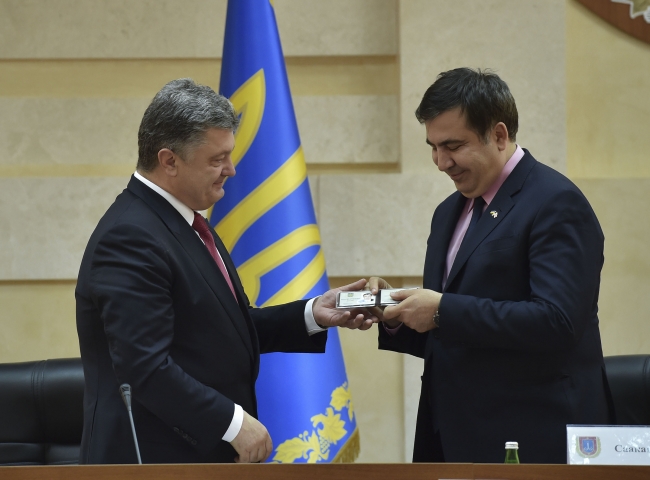 Saakashvili, 47, is now using his post as governor of Odesa to stage his trademark televised 'shouting and outing' of corrupt officials, and has skilfully courted the international press pool to build his campaign. As the informal leader of the Georgian reform team, he is already practically shadow prime minister: observers note that it wasn't until Saakashvili said the word that the formerly Georgian, now formerly Ukrainian health minister Kvitashvili agreed to step down on July 3. “Saakashvili has very serious influence over the situation in the country,” Kvitashvili said in a subsequent  interview.

From the get-go, Georgia’s ex-president launched himself headlong into across-the-board reforms, boldly exceeding his prescribed authority as Odesa governor. Those standing in his way have been bulldozered,  with some backing and muscle from the top. When Saakashvili accused the head of the state aviation service of favouring the airline of oligarch Ihor Kolomoisky,  the head of the service was suspended immediately; a head prosecutor from the western Ivano-Frankivsk region who criticised his outspokenness was fired on the spot, as were customs officials shamed during one of the hands-on visits by Saakashvili to trouble spots and institutions. The governor also slammed the state road-building company for corruption, and its formal liquidation was announced within days.

At a recent meeting of regional governors, Saakashvili even publicly claimed the right to make the rules up as he goes along: “It may have been against the law, but it's better we act against the law than the country collapses,” he declared in Poroshenko’s presence, responding to criticism by a fellow governor of his creation in Odesa of a single-window administrative service centre.

Not content with singlehandedly reforming prosecutors, road builders, sky marshals, and customs, Saakashvili even started to pull rank on the armed forces, in the form of Ukraine's decimated navy, now based in Odesa after its ejection from Crimea by Russian forces. On July 6 he called for a new national admiralty to be symbolically housed in Odesa's former trade union building – the scene of tragedy in May 2014, when fire swept through the building, killing up to 50 pro-Russian demonstrators after Ukrainian nationalists tossed in petrol bombs.

How incendiary his appointment and ambitions will prove for the region and country is hotly debated. But if self-perception is anything to go by, amid the voices saying Ukraine is ‘too big to fail’ for the West, Saakashvili also evidently feels he is too big to fail in his chosen assignment.

First deputy head of the Ukranian interior ministry, former Georgian interior minister Eka Zguladze, is a close Saakashvili ally who has Poroshenko’s backing to head the planned new national police. In a move that still creates more questions than answers, the US-styled force will replace the existing Soviet-style 'militia', operating independently of the ministry as a carbon copy of the Georgian police force Zguladze created some years earlier with widely hailed success.

Zguladze's first step towards her future post was rolling out the new Kyiv patrol police on July 4, which prompted wide positive international coverage, although oligarch-owned TV channels had a field day with a subsequent series of accidents involving new cop cars. The new police force with its slick dark uniforms and Japanese patrol cars symbolises the change in Ukraine like little else – and the camera-friendly, petite 37 year old, married to the son of French philosopher and Kremlin foe André Glucksmann, is one layer of icing on the change-cake. 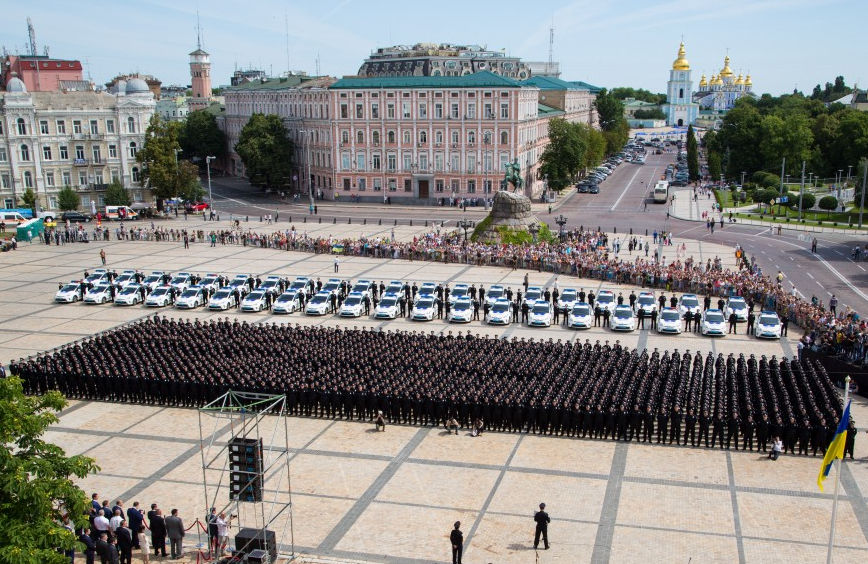 But a potential pitfall in her work to date is again related to ‘making up the rules’ on the way. Poroshenko has not yet signed the new force into formal existence by inking the bill “On the national police”, meaning that many aspects of its work are unregulated, including the relationship to the already existing militia. “Why roll out such an indispensable measure (...) in such an obviously illegal manner,” blogged MP Serhiy Vlasenko, of the Batkyvschina opposition party.

Deputy prosecutor general Davit Sakvarelidze is the third in the Georgian triumvirate that looks set to control government and law enforcement in Ukraine. He is tipped to become anti-corruption prosecutor, as soon as parliament has got the legislation on its books.

Davit quickly made a name for himself by taking down ‘baddies’ in inimitable Georgia-meets-Hollywood fashion. On July 6, together with a Swat unit, he stormed the holiest of holies – the office of Ukraine's prosecutor general, to seize hundreds of thousands of dollars and bags full of diamonds in alleged bribes paid to Kyiv city deputy prosecutors.

The raid was a stupendous success and drew stormy applause on Facebook and other forums, but also drew a charge of being vigilante in its implementation: Ukraine's recently appointed first deputy prosecutor general promptly filed criminal charges against Sakvarelidze personally for “armed seizure of a state building”, punishable by up to 10 years in jail, because he had no court order for the assault on the prosecutors' offices. The charges were apparently withdrawan after presidential intervention, and on July 14 MP Serhiy Leshchenko said separate charges had been brought against Sakvarelidze's investigators for falsifying evidence.

‘This job can seriously damage your health’

His was a speedy appointment:  "Everything happened within 36 hours," said 44-year-old Kvitashvili, who previously served under Saakashvili in Georgia. Arriving in Kyiv just over seven months ago, he went through a 40-minute job interview with Poroshenko, Yatsenyuk and the speaker of parliament, applied for Ukrainian citizenship the next day and was appointed health minister hours later.

That was perhaps the last good news of his tenure. Kvitashvili received a monthly salary of only UAH5000 ($230), with lower ranked officials earning around UAH2000 ($96), meaning that as soon as the traditional informal supplementary cash payments to civil servants stopped flowing, and Kvitashvili cut down on bribery schemes in the ministry, its workers rushed for the exit. The tiny salaries made it impossible to hire new specialists, meaning the ministry effectively stopped functioning.

In early April, Kvitashvili fired all his deputies but could not find adequate replacements. This prompted the parliamentary group of Poroshenko's eponymous party to push for his firing for "having lost control of the ministry" – despite having backed him for the job in December 2014.

Not even his firing went smoothly, however. With parliamentarians baying for his dismissal he handed in his resignation, but a week later it had still not been accepted. Kvitashvili still features as minister on the website of the government and health minister. İn a press interview, he said if his resignation was not accepted, it would make Ukraine into “some sort of kindergarten”.

The main problem facing the Georgian reformers in Ukraine, compared to Georgia, is Ukraine's semi-parliamentary system, compared to the strong presidential system during Saakashvili's Georgian presidency, Kvitashvili said.  “In a parliamentary republic it is very difficult, almost impossible to conduct unpopular reforms. There will always be a very high level of populism in parliament,” he warned.

Another Georgian appointed to high office in Ukraine, First Deputy Justice Minister Gia Getsadze, also cited old habits that were making it hard to effect real change: "The old Soviet traditions are preventing work,” Getsadze told the Ukrainian magazine Novoe Vremya in April. “It’s like when a lot of employees go on sick leave. Or people with whom you’re talking, looking into their eyes - they work in the system, but do not believe in changes."

Formerly dean of the law school at the State University in Tbilisi, Getsadze now chairs the justice ministry’s committee on the reform of the court system and is in charge of anti-corruption action.