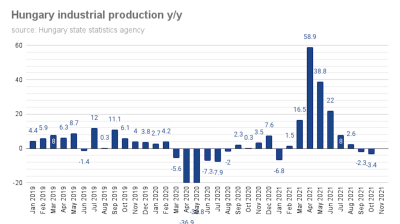 Industrial output fell for the second straight month in October, down 3.4% y/y and by 2.7% when adjusted for working days, following a 2.3% drop in September as companies were forced to lower capacities due to the semiconductor shortage, according to preliminary data from the Central Statistics Office (KSH).  Analysts do not expect supply-side tensions to ease before mid-2022.

Data shows slight improvement on a monthly basis, as output edged up 0.3% from September, up from a decline of 0.3% in the previous month. This marked the first monthly increase in the sector since May.
Hungary’s industry was the first major sector to return to pre-crisis levels after a steep drop in the aftermath of the pandemic. Production volumes have stagnated from the summer, hit by constraints in production, Portfolio wrote.

The output of the automotive sector, which has the biggest weight in manufacturing in Hungary, fell significantly as companies cut back because of the global chip shortage, KSH said. Production in the electronics sector, the other major component of the manufacturing, also dropped. A detailed breakdown by sectors will be published next week.

The supply problems affecting the two most important sectors of the industry are not likely to be resolved in a short period, opined ING Bank analyst Peter Virovacz. The strength of smaller sectors will not be enough to counterbalance these negative trends due to the labour shortage, he added. ING expects stagnation or low growth in the coming months and the risks to spill over to 2022.

The order book of Hungarian companies foreshadows strong growth, but the main question is when supply problems will ease. Experts believe that the sector will still face difficulties in 2022.

Supply constraints have set back growth by 1-2pp in October, according to Takarekbank. Chief analyst Gergely Suppan said industrial output might have risen 9-12% excluding the chip shortage, which has dragged output back under pre-crisis levels.

The low base, new capacities starting up, pent-up demand and restocking of inventories could lift full-year industrial output by 10-11%.

COMMENT: Emerging European tightening cycle coming to an end
Hungary's industrial output picks up in June, but outlook mixed as economy set to slow down
Hungarian consumers cut back spending in June

Unemployment slightly rose in Czechia in July
2 hours ago
Moldova’s maize, sunflower crops decimated by drought
3 hours ago
North Macedonia’s annual inflation accelerates to 16% in July
16 hours ago
Romania’s central bank slows down monetary normalisation cycle with a 75bp hike
1 day ago
Hungary's industrial output picks up in June, but outlook mixed as economy set to slow down
1 day ago