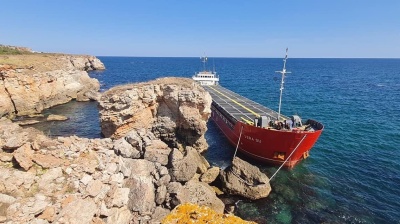 The Vera Su ran aground on rocks off the Bulgarian coast earlier in September.
By Denitsa Koseva in Sofia September 27, 2021

A ship transporting nitrogen fertilisers from Ukraine to the port of Varna in Bulgaria is threatening the ecosystem of Bulgaria's Yailata protected area, Borislav Sandov, co-leader of the Green Movement party, warned on Facebook.

The Vera Su got stuck on rocks off the Bulgarian coast earlier in September and, while there is not yet official confirmation, environmentalists say it is already leaking part of its cargo, which could endanger the sea life in the area.

“Criminal inaction at the institutional level is the lack of adequate reactions after the stranding of the cargo ship Vera Su off the coast of the protected area Yailata. There are actions and measures in the law that have not been implemented, and time is advancing dramatically. Environmental damage can be very serious and can reach a huge area over time. We are talking about 3.3 thousand tonnes of nitrogen fertilisers and tonnes of diesel fuel! Today we expect results from the samples we took over the weekend and then we will be able to say if there is already a spill,” Sandov wrote on Facebook on September 27.

He said local authorities were proposing “inadequate measures” that would further endanger the area, including a plan to blow up the rock below the ship.

Sandov warned that, should the authorities blow up the rock or delay the unloading of the cargo any further, this would destroy the fishing industry in a large area, as well as tourism in the area.

The Marine Administration, in charge of the area, has not taken measures for days, while the environment ministry has banned the blowing up of the rocks in order to prevent a disaster, Sandov said.

He suggested that calling in the army to unload the cargo manually would be a safe and quick enough response.

However, until September 27, the Bulgarian authorities insisted that the owner of the ship, which is sailing under Panama’s flag, and its insurer, have to unload the cargo themselves.

“[T]hose responsible for fetching the ship are the owner and the insurer. In the absence of action on their part, the Executive Agency Marine Administration has to intervene and undertake a rescue operation and then present the bill to the owner,” the environment ministry said in a statement.

It has taken samples from the water around the ship to find out whether there has been a leak. The express tests did not show unusual data for the area. However, Sandov suggested that most likely the ship’s crew is unloading cargo at night, which could be the reason for the lack of unusual data during the day.

The transport ministry has now decided to initiate an operation to release the ship, criticising Vera Su’s owner for failing to take responsibility. There is no clear data on which company owns the ship.

On September 27, the marine administration decided to protect the ship with bigger anchors due as strong winds are forecast. The administration also decided to initiate an operation to unload the cargo by hand in an attempt to avoid the devastation of the local ecosystem.