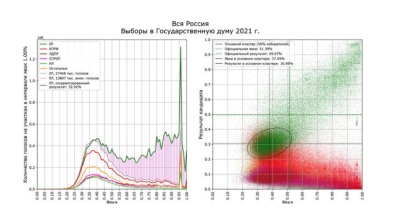 A statistical study suggests that nearly half the votes in the Duma election were fake.
By bne IntelliNews September 22, 2021

Famous Russian physicist and election statistician Sergei Shpilkin studied the voting patterns in last weekend's Duma election and concluded some 14mn votes, roughly half of all the votes, were faked by the authorities.

Shpilkin is a well-known scientist and has produced studies of the raw voting numbers in each of the last two general elections that have shown the extent of falsification.

The mathematical principle underlying his studies is that voting numbers should be randomly distributed, but fixing disrupts that distribution in an easily identifiable way. Fairground owners use the same principle to see if their staff are stealing cash: if the employees nick mostly £1 coins then there are too few of these in the distribution of coins taken in and it is even possible to calculate fairly accurately just how many £1 coins have been stolen. Likewise with election officials that inject votes: they tend to round up to the nearest 0 or 5, creating spikes on the chart at the round numbers.

In a recent interview with Meduza Shpilkin complained that the Central Election Commission (CEC) had put restrictions on access to the raw voting data for the first time; nevertheless, he managed to obtain the data and has produced a study of the voting patterns that are very similar to previous election results, and show massive falsification. 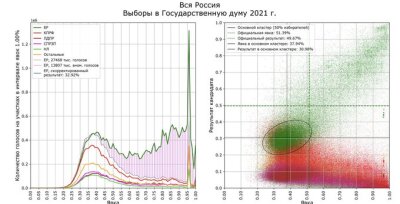 The chart on the left shows voting results and as in previous elections show United Russia winning a clear 35%-40% of the vote without falsification. Indeed, in these elections United Russia seems to have improved its core support from the 35% it won fairly, according to the previous studies.

However, the red hatched area shows the fake votes and the big spike at 95% is due to the massive falsification in the Moscow vote, as bne IntelliNews reported in a blog this week; most of the seats in Moscow were won by candidates other than United Russia, according to the paper ballot exit polls, but all those victories were overturned and won by United Russia candidates after the electronic votes were counted into the total tally.

Evaluating the red hatched area in the first chart Shpilkin calculates that some 14mn votes were faked, enough to give United Russia 49% of the vote and 315 seats, a constitutional majority. The KPRF ended up with just under 20% of the vote and slightly less than 70 seats in the 450-seat legislature.