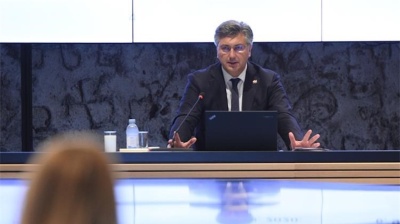 Albania and Croatia became the latest governments from Southeast Europe to announce new measures to help their populations cope with soaring prices, with new support packages announced in both countries on September 8.

Countries across Europe are have been experiencing sharply rising food and fuel prices since the pandemic started to abate last year, which accelerated following Russia’s invasion of Ukraine in February.

This was made worse by droughts in much of Europe, which reduced food production and dragged down electricity generation from hydropower; Albania in particular produces almost all of its electricity from hydropower and has been forced to rely on costly imports.

Croatia to back households and companies with €2.8bn

Croatia’s government unveiled a package of measures worth HRK21bn (€2.8bn) to support households and companies amid surging energy prices on September 8.

The government of Prime Minister Andrej Plenkovic has been intervening on the fuel market, capping retail prices for months. Now the new aid package aims to protect households and all sectors of the economy.

“No one was excluded [from the package]. We shall secure a peaceful and predictable autumn and winter, because all actors will now know what their costs will be and how they can function in global conditions that are very different from the reality that we are now creating with these measures,” Plenkovic said.

He added that the Russian war in Ukraine has created a time of disruption, which, combined with climate change, is leading to a hike in prices of energy and food.

As of October 1, the government will cap electricity prices for companies, public institutions and households to mitigate the impact of surging energy prices. This measure will be in force until the end of March next year.

The natural gas prices for households will be limited until April 1, 2023.

The government will also secure HRK1.9bn in incentives to encourage transition to energy saving technologies and production of electricity from renewable sources.

The package also envisages a cap to be also set on the prices of cooking oil, milk, sugar, wheat, pork and chicken meat.

To compensate for these spendings, the government will impose a special tax on companies that made excessive profits during the crisis.

On the same day, statistics office Instat reported annual consumer price inflation of 8.0% in July (up from just 2.4% a year earlier). While inflation is lower in Albania than most of its regional peers, the price increases in recent months have squeezed households’ finances and sparked protests back in April.

Among the key elements of the Social Resilience Package are: a hike in the minimum wage to ALL34,000 (€290); a 10% increase in economic benefits with an extra boost for women-headed households with two or more children; a 7.5% increase in disability payments; and, pay rises for the police and civil servants.

Pensions are being re-indexed to the new inflation rate, bringing the annual indexation to 9.5%.

The government also plans to increase financial support for farmers by providing tax-free oil, and to guarantee energy price protection for households and small businesses.

“[T]he package is conceived as medium-term support not as a temporary support extending over one, two or three months, which means that we have taken into account the fact that this crisis is of an unpredictable nature as to when it ends, and our commitment is to give our people medium-term, sustainable support,” Rama said on presenting the package.

Rama reiterated the government’s commitment to protecting families and businesses from the increase in energy prices. "This protection so far is also the basic reason why we have the lowest inflation in our region and we have lower inflation than in the entire euro area because we have not increased the price of energy, which would then lead to an increase in all other prices,” he said.

Albania produces almost all of its electricity from hydropower but when weather conditions are not favourable it relies on imports to cover part of domestic consumption. Dry weather earlier this year forced the country to make imports at a time of high prices on international markets.

However, to avoid subsidising richer households with a high level of energy consumption, Rama said that electricity use over 800 kwh would be paid for at the market rate. Analysis has shown that over 90% family consumers consume smaller amounts of electricity.

[W]e are talking about family consumers with villas, with swimming pools, with large yards, with decorative lighting and so on for whom we think the time has come that the budget can no longer pay, the state and ordinary taxpayers can no longer pay … with this [measure] we also intend to create pressure to reduce the excessive consumption of electricity in crisis conditions,” the prime minister said.

Earlier in the week, North Macedonia’s Prime Minister Dimitar Kovacevski presented his government's plan for dealing with the energy crisis to the country’s Security Council on September 6.

The country is looking for ways to deal with high prices of gas and electricity ahead of the winter season. The plan is estimated to cost €300mn this winter alone, but no electricity restrictions are envisaged.

On September 7, the statistics office reported inflation had accelerated by 0.8 percentage points (pp) from the previous month to 16.8% in August (chart). Food, rather than transport costs, was the biggest driver during the month, posting annual growth of 25.1%.

According to the plan to tackle rising energy prices, state-owned power producer ESM will increase the electricity production by 25% this year, PM Kovacevski said.

ESM should also put into operation the third unit of the thermal power plant REK Bitola, the second boiler of the supporting thermal plant Negotino and the cogeneration plant TE-TO, while all hydro power plants will work at full potential.

ESM should also finish the process of taking over the heating energy supply for some 55,000 households in Skopje by BEG, which was stripped of its licence because of its inability to deal with the crisis.

"This autumn, winter, and the next spring will be the most difficult in the post-war Macedonian state, and we will endure it and overcome it together," Kovacevski said.

The previous day, Kovacevski visited Sofia where he got assurances that North Macedonia would obtain certain quantities of electricity by March 31, 2023.

On September 2, North Macedonia, Serbia and Albania decided to set up a working group to deal with the consequences of the energy crisis as part of the Open Balkan initiative.