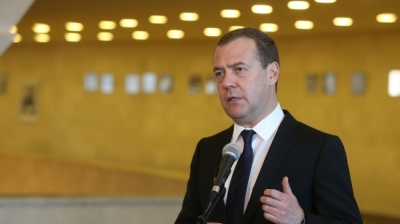 Medvedev, once known as a relative liberal, now widely seen as an anti-Western hawk. / wiki commons.
By bne IntelIiNews August 3, 2022

The VKontakte (VK) social network account of former Russian president Dmitry Medvedev briefly featured a nationalist, pro-imperial post, referring to Kazakhstan and Georgia as "artificial" creations, but the post was taken down 10 minutes later and attributed to hackers.

The post appeared on August 1. It was viewed 2,000 times, as seen on multiple screenshots that were posted on social media. Russian TV personality Ksenia Sobchak placed the post online, after which it went viral with around 450,000 views within the space of hours.

The controversial text claimed that Georgia never existed as a country and that Kazakhstan is an artificial nation, while accusing Kazakh authorities of committing genocide against Russians. The post added that the territories of the two ex-Soviet states must be returned to Russia.

Moscow is "getting ready to undertake the next move to restore the borders of our homeland," the post also said. It then stated that Russia’s invasion of Ukraine would liberate lands and return them to Russia.

On August 2, an aide of Medvedev—accused lately of making a journey as a politician from liberal to anti-western hawk—Oleg Osipov denied that the ex-president wrote the post, saying that the text only appeared after the account was hacked.

"VK's administration, and those who are supposed to do the job, will take care of those who hacked the account," Osipov wrote on Telegram.

VK’s administration said on the same day that the post was published by a “third-party user” and added that its security team was working with “competent services to identify the causes of the incident.”

Sobchak also speculated that Medvedev’s account had been hacked.

“The rhetoric [in the post] is too much even for him,” she wrote on her Telegram channel late on August 1.

Hacked or not, Medvedev has been publicly very hostile to the West and Ukrainian “nationalists” since the start of the invasion. He has also called on Russia to seek an expansion of its borders.

There is clear anxiety among some Kazakhs that Russia could have ideas of snatching at least the northern part of their country. Most of the one-fifth of Kazakhstan’s population who are ethnic Russian reside in the north. In late July, it was reported that Kazakhstan has significantly boosted its defence spending.