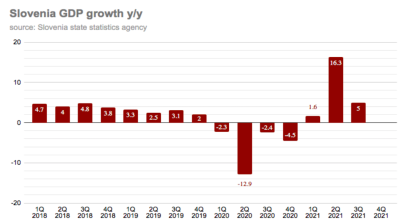 The worsening epidemiological situation in Slovenia with a spike of new coronavirus infections amid the spread of the Omicron variant had a relatively small impact on the domestic economy, the central bank said on January 25.

The country’s high GDP growth decelerated slightly since Slovenia regained its pre-crisis GDP level. According to statistics office data, Slovenian economy grew by an annual 5% in the third quarter of 2021, following the strong 16.3% growth in the previous quarter.

“Amid heavy government investment, growth is being driven markedly by domestic demand, which is significantly stronger than the euro area average. This is being reflected in a rapid narrowing of the current account surplus”, the Bank of Slovenia said.

The central bank estimated that the country still faces certain macroeconomic risks, as many people are absent from work amid record case numbers, as well as due to the high energy costs and inflation, which is already curtailing real growth in household income.

Employers are facing growing shortages on the domestic labour market and are forced to hire foreign nationals.

General government revenues posted a strong growth of almost 11%, thanks to strong economic growth driven largely by booming final consumption, and a sharp rise in employment and wages. The growth in general government expenditures was around 4 pp lower.

"The scale of the anti-coronavirus measures in the second half of 2021 was smaller than in the first half, following the expiry of the largest measures in June. The nominal debt remained well above its pre-crisis level, despite the improvement in the public finance indicators," the central bank said.

The population in Serbia continuously decreased in 2002-2021, with the most pronounced decrease seen in southern and eastern Serbia.

Price rises and demand weakness combined to lead to softer new orders and scaling back of production.

The seasonally adjusted S&P Global Russia Manufacturing Purchasing Managers’ Index was back in the black in June, posting 50.9, in line with 50.8 registered in May, as Russia’s economy stabilises.

Russian economy stable in May, but demand and income contraction deep

An upbeat data release by statistics agency Rosstat suggests that Russia’s economy is doing better than expected. Capital Economics has revised its estimates for the GDP contraction in the first quarter down from -15% to -10%.

The European Commission’s Economic Sentiment Indicators (ESI) for Central and Eastern Europe (CEE) fell in May as the polycrisis hitting the world took its toll on economies across the entire region.

Serbia's population continues to decline
4 hours ago
June PMI shows Turkish manufacturing sinking further into contraction territory
1 day ago
Russia’s manufacturing PMI in the black in June as the sanction shock starts to wear off
1 day ago
Russian economy stable in May, but demand and income contraction deep
2 days ago
CEE Economic Sentiment Indicators fall on polycrisis woes
2 days ago