Slovakia’s inflation up again to 2.9% y/y in July 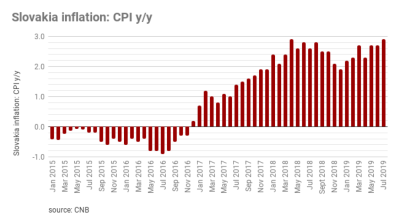 Year-on-year inflation in Slovakia rose to 2.9% in July, up by 0.2 percentage points (pp) from June, with core inflation standing at 2.5% and net inflation at 1.9%, the data of the Slovak Statistics Office (SSO) showed on August 13.

While elsewhere in the Eurozone the consumers prices increased at a slower pace, in Slovakia the inflation accelerated, boosted by the food prices, Hospodarske Noviny reported. Postal services, where regulated prices went up by 5% in July, were the fastest growing item of the consumer basket. However, given their value, the prices of housing and food affected inflation the most. The two, together with electricity, water and gas, contributed nearly two-thirds to the acceleration.

Slovenska Sporitelna Analyst Katarina Muchova believes that the prices of services (especially postal, recreational and in culture) as well as of transportation that increased by 0.6% m/m were behind acceleration of inflation. "Overall, the prices of services reflect improving situation on the labour market and the consequent higher disposable income of households. On the other hand, food prices dropped by 0.2% if compared to June, mainly due to lower prices of vegetables, fruits, oils and fats. This year, we expect average consumer inflation at 2.5%," said Muchova, as quoted by the Slovak News Agency.

According to UniCredit Bank Analyst Lubomir Korsnak,” in the upcoming months, inflation should remain right below 3%. Upside inflationary risks are expected from higher food prices as well as the continued impact of higher salaries in the economy on prices of services. Conversely, downside risks should come from the fuel prices in the coming months, as those are likely peaking now.”

“On the other hand, demand inflation pressure should gradually stabilise and may slowly begin to moderate at the turn of the year, caused by the weakening economic growth influence. Lower demand pressures should be fully visible in the inflation in 2020, when we expect it to return slightly below 2%," added Korsnak.