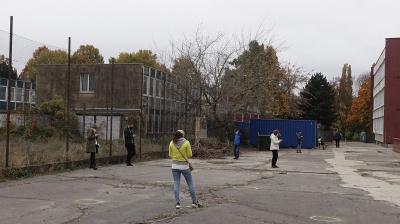 Slovaks queue at a testing station.
By bne IntelliNews January 21, 2022

Slovakia's very low COVID-19 vaccination rate – just 48% of people are fully vaccinated, according to Our World Data, as of January 18 – is making it stand out for all of the wrong reasons in the EU. Within the bloc, it is just ahead of Romania (41%) and Bulgaria (28%), and is way below neighbouring countries such as the Czech Republic, which has vaccinated 63% of its population.

Central Europe is once again one of the regions worst affected by the global pandemic, as its underfunded health systems struggle to cope with the impact of the latest wave of the coronavirus on the large numbers of their citizens who are still unvaccinated.

Slovakia's poor vaccine performance is being blamed on the government's unclear policy direction, but the opposition has also played its part, by building on widespread distrust of the state and rampant misinformation to encourage opposition to the government's measures to control the pandemic. Now, with Omicron sweeping westwards across the continent, the government appears to think it has missed its chance and that people will now just be vaccinated by becoming infected.

According to the latest report on Slovakia by the OECD, the low vaccination rate continues to pose risks to Slovakia´s EU recovery and resilience plan. “By early-January 2022, only around 45% of the population was fully vaccinated, around 25 percentage points below the EU average. Vaccination rates are particularly low in several eastern regions,” the OECD commented.

“The immediate policy priority for the Slovak Republic is to get more people vaccinated,” OECD Secretary-General Mathias Cormann said. “Once beyond the crisis, addressing the challenges of population ageing will be critically important," he added.

According to daily Sme, the vaccination failure is the result of several poor political decisions of the four-party government led by the populist OLaNO party, ambiguous political communication about the vaccines, and questionable measures aimed at increasing the vaccination rate.

According to the polls from December, most Slovaks believe in hoaxes and disinformation which contributed to increased vaccine reluctance in the country and allowed disinformation to spread. “Efforts to enhance trust in vaccinations by providing reliable information and tools to detect misinformation can contribute to reducing vaccine hesitation,” the OECD report stressed.

Research done by GLOBSEC shows Slovakia is considered to be the most conspiracy-prone in the CEE region and the lack of decisive political leadership only adds to the turmoil. “There are so many different actors in Slovakia, from politicians to various outlets, that actively peddle disinformation,” GLOBSEC analyst Katarina Klingova told Balkan Insight.

Vaccination has been politicised and exploited for the purposes of political campaigning. Former prime minister Robert Fico has become one of the biggest sceptics of the government measures and the vaccination drive, even though his Smer party was in charge when the first measures against the pandemic were taken. He was arrested in December when he led a protest during the lockdown.

“People lost trust in the government, the vaccines, and do not even believe in the existence of the pandemic itself, despite the fact that dozens of people die of COVID-19 every day,” Ondrej Lunter, a regional official, told Sme.

“We failed to persuade people that vaccination is more advantageous for them than getting infected,” added mathematician Richard Kollar, one of the leading observers of the pandemic in Slovakia and co-founder of the Science Helps initiative.

The vaccination lottery which the Slovak government introduced earlier in the autumn last year, as well as the vouchers for vaccinated people over 60 did not have the effect that Finance Minister Igor Matovic planned. At least half of Slovaks still seem to hesitate and reject anything that is vaccine-related.

At the end of last year, the government imposed a lockdown and discussed compulsory vaccination; however, now it probably does not make any sense in Slovakia any more, said Matovic, as Slovaks who wanted to get vaccinated have already done so, while those who reject it will be "vaccinated by Omicron itself".

"Forcing people to be vaccinated isn't the agenda of the day at the moment, as we don't know how COVID-19 will develop further, whether or not it will take a form that we all wish for – resembling a common viral disease," Matovic was quoted by the news agency as saying.

Also Labour Minister Milan Krajniak sees compulsory vaccination in Slovakia as a pointless issue now. "As we can see in [other] European countries, where the Omicron wave is already culminating, the numbers of people admitted into hospital are much lower than for previous variants," he noted.

On the contrary, Health Minister Vladimir Lengvarsky said he personally continues to advocate mandatory vaccination, at least for selected groups at risk, which are the elderly and workers in critical infrastructure.

Now, with the Omicron variant becoming dominant in Slovakia, the government introduced new measures, including the new OP+ mode – people with three vaccine doses, fully vaccinated people (two doses) recovered from coronavirus and/or who tested negative – which is required to enter selected establishments and services, as well as weddings or wakes. Mandatory testing of unvaccinated employees once per week remains in place.