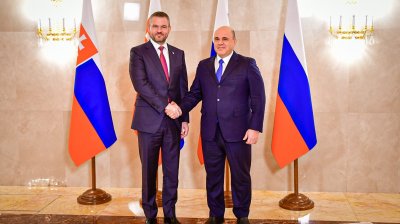 According to Pellegrini, Slovakia, as an EU member, “is aware of complications that hamstring ties between the EU and Russia, but Slovakia also holds its own views on how relations with Russia, including sanctions, should look and is ready to present them,” the prime minister said as cited by the news agency.

Slovakia has been among the countries against the barriers and the constant application of sanctions. “We can surely achieve a lot more with dialogue than with certain harsh stances from either one side or the other,” Pellegrini stressed.

“A country like Slovakia is unlikely to be able to do this [construction of nuclear fuel repository] on its own,” said Pellegrini. The CEE countries thus should consider a joint project purchasing nuclear fuel from Russia, with a waste disposal facility located in Russia.

Donald Trump said on April 2 that Russia and Saudi Arabia would be cutting their output, instead of continuing with a supply war that could result in hundreds of oil companies going out of business. The Kremlin denied his claim.