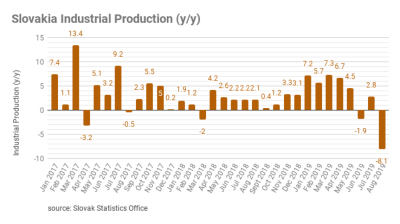 Slovakia ́s industrial production recorded a year-on-year decline of 8.1% in August, the biggest drop since 2012
By bne IntelliNews October 13, 2019

Slovakia ́s industrial production recorded a year-on-year decline of 8.1% in August, the biggest drop since 2012, mostly due to a 9.5% decrease in industrial manufacturing, following a 2.8% increase in July, the Slovak Statistical Office (SSO) announced on October 10.

“The trend has been worsening, however, in July and August we have to take into account also factory holidays,” Lehuta noted, adding that he expects the industry numbers to amount to 3% by the end of the year.

As SSO reported, the supplies of electricity, gas, steam and air-conditioning rose by 1.9% y/y and the output of mining and quarrying by 5%. “After seasonal adjustment, industrial production decreased by 2.6% in August compared to July,” said SSO spokesperson.

In 8M19, industrial production accelerated by 3% y/y, following growth in electricity, gas, steam and air-conditioning supply by 8.6%, in mining and quarrying by 3.3% and in manufacturing by 2.3%.

Industrial output is expected to amount to 1.7% in 3Q19, according to Trading Economics global macro models and analysts expectations. “Looking forward, we estimate industrial production in Slovakia to stand at 1.7% in 12 months time. In the long-term, the Slovakia industrial production is projected to trend around 1.6% in 2020, according to our econometric models,” they said.

Real wages in Ukraine dropped 0.4% y/y in April, after growing 9.3% y/y in March
20 hours ago
New coronavirus cases decline across emerging Europe but the epidemic’s not over yet
1 day ago
COVID-19 lockdown results in collapse of Lithuanian retail sales in April
2 days ago
Russian retail sales down by a quarter year on year in April, as unemployment soars
3 days ago
Ukraine’s real wage gains still positive but fall in dollar terms in March
3 days ago