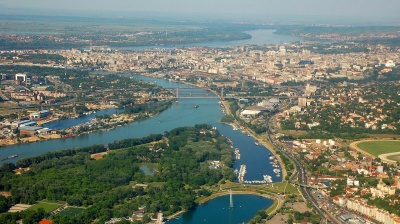 Serbia is set to outperform the rest of Southeast Europe this year, with a considerably smaller economic contraction forecast than for most of its peers in the region.

The World Bank’s annual Regular Economic Report for the Western Balkans released on October 22 puts the GDP contraction for Serbia at just 3% this year, better than the other Western Balkan countries, whose projected contractions range from 3.2% in Bosnia and Herzegovina to as deep as 12.4% in Montenegro. 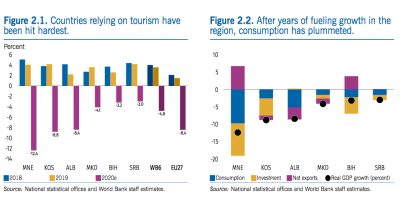 This is broadly in line with the forecasts from other international financial institutions (IFIs). World Bank projections also show that the Western Balkans, with an average regional contraction of 4.8%, will do better than the EU at -8.4%. Earlier forecasts from the World Bank show Serbia will do better than the EU members in the Southeast Europe region too.

There are various reasons for the better forecast for Serbia. First, the country is less dependent on tourism than many of its peers, in particular Croatia and Montenegro.

Serbia was in a relatively strong position entering the crisis, with growth of 5.1% year on year in the first quarter, and it swung to a decline of 6.4% in Q2, again better than most of its peers. Serbia’s government put also forward the largest economic stimulus in the Western Balkans.

Despite the overall decline in the economy in 2Q20, led by services and industry, there was positive value-add in agriculture, ICT, financial services and construction, the World Bank said.

An earlier report published by the European Bank for Reconstruction and Development (EBRD) on October 1 said that the high contribution of manufacturing of basic products to the overall output was another contributor to Serbia’s economy being less affected by the coronacrisis than its local peers.

However, while economies started recovering in the summer as the first wave subsided and lockdowns were lifted, Serbia was hit by a surge in coronavirus (COVID-19) cases in June, July and early August after the government eased restrictions early to allow the June general election to go ahead.

Out of sync with other countries in the region, Serbia then saw a relatively low incidence of coronavirus in early autumn, though numbers have started to rise sharply in the last week as it heads into a third wave.

It’s also worth noting the base effect: Serbia’s economy expanded significantly in 2H19 due to the one-off investment in a new gas pipeline.

Developments in Serbia come in the context of a sharp regional – and indeed global – decline as the COVID-19 pandemic plunged the Western Balkans into deep recession, and Serbia is no exception.

“The primary causes are the drop in both domestic and foreign demand and disruptions in supply chains, especially early in the year when throughout the world countries imposed severe containment measures, such as lockdowns,” said the World Bank report.

“A second and much stronger wave of the pandemic in the Western Balkans since mid-June and political uncertainty about elections in some countries have further impeded economic recovery. Due to travel restrictions and social distancing requirements, the summer tourism season has essentially been lost, which has hit Albania, Kosovo and Montenegro particularly hard.”

The massive economic stimulus packages extended by all governments in the region provided immediate relief, but, warns the World Bank, as a result, deficits will deteriorate drastically in all six countries. Public and publicly guaranteed debt is projected to peak in 2021 at close to 60% in North Macedonia and Serbia, 81.3% in Albania and 97.9% in Montenegro.

Moreover, the future outlook for recovery is highly uncertain: “In countries like Serbia and North Macedonia where a fragile recovery has begun, a new wave of infections could interrupt the process,” the World Bank report says. Serbia has also seen some of its major corporates, among them flag carrier Air Serbia and telecoms company Telekom Srbija, struggle, points out the report.

Among the other forecasts from IFIs and analysts, the EBRD forecasts that the economy will contract by 3.5% in 2020 and recover by 3% in 2021.

The International Monetary Fund expects a contraction of just 1.5% this year after economic activity rebounded in 2Q20, the fund said on October 16 following a virtual visit to the country. This forecast is a significant improvement compared with the 2.5% contraction predicted in the latest edition of the IMF’s World Economic Outlook released earlier in October.

However, the IMF noted that downside risks are high: “[T]he outlook remains highly uncertain, reflecting the unpredictable course of the epidemic and related economic disruptions in Serbia and its trading partners.”

Rating agency Fitch forecasts GDP will contract by 2.2% in 2020, noting Serba’s “relatively good economic performance compared with rating peers, and a policy response that we expect to help generate a firm recovery from the pandemic shock … Resilience to the coronavirus shock is also supported by Serbia's minimal exposure to tourism and the positive impact of lower energy prices.”
Read in IntelliNews Pro
Get IntelliNews Pro

The state is back in business

Some Nasdaq Baltic indexes show a noticeable improvement since the news of successful coronavirus vaccine trials broke earlier this month.