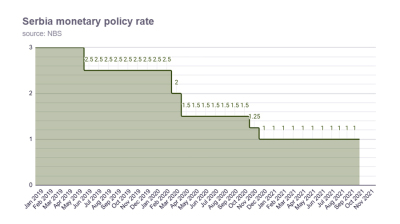 The executive board of the National Bank of Serbia (NBS) has decided to keep the key policy rate on hold, at 1.0%, and to continue with monetary policy tightening via the repo rate and withdrawal of a larger amount of excess liquidity from the banking sector.

In making the decision, the executive board was guided by the fact that the current monetary policy framework gives room for the NBS to reduce the level of monetary policy accommodation amid heightened inflationary pressures both at home and abroad without changing the main interest rates, the statement said.

The NBS has been gradually moving in this direction for the past two months. After it stopped holding securities purchase repo auctions, previously used to provide banks with dinar liquidity under favourable condition, at the beginning of October, the NBS began a cycle of raising the weighted average rate at repo sales of securities.

The rate was raised by 16 bp in October from the previous level of 0.11% to 0.27%, where it stood for the past two reverse repo auctions, used by the NBS to withdraw excess dinar liquidity from the banking system.

The NBS executive board noted that it is important to impact inflation expectations in conditions of cost-push pressures that are stronger than anticipated.

Hikes in the global prices of energy and other primary commodities, halts in supply and significantly higher prices of transportation globally, together with the effects of last year’s low base, have led to higher cost-push pressures in the global and local markets. Also, in Q3 the usual seasonal fall in vegetable prices in the local market was missing due to drought, and this was what mostly drove y/y inflation (5.7% in September) above the NBS’s expectations.

Still, the executive board stressed that, unlike the majority of other inflation targeting countries in the region, core inflation, which monetary policy measures affect the most, is still in the lower half of the target tolerance band for headline inflation in Serbia (2.6% y/y in September), which is mostly attributable to the stability of the exchange rate, said the NBS in the statement.

Like most other central banks, the NBS expects that the factors behind the higher headline inflation will for their major part be temporary and that their effect will dissipate next year. The NBS expects inflation to slow down from Q2 2022, return within the bounds of the target around mid-year and retreat to the lower half of the band before the year’s end.

The NBS said it is ready to respond promptly by using all monetary policy instruments available should any of the risks that would keep inflation above the upper bound of the target band for a prolonged period of time materialise.

In its decision-making, the executive board also bore in mind that the positive effects of past large-scale monetary and fiscal measures on economic activity, including the third support package for businesses and households, could be expected going forward and that the favourable financing conditions could be sustained at a somewhat lower degree of monetary accommodation, the NBS said.

Serbia’s GDP growth has outperformed expectations this year, and the NBS estimates GDP is now more than 3% higher than before the pandemic. As estimated by the statistics office, economic activity grew by 7.4% y/y in Q3, on the back of the maintained investment and consumer confidence, as well as production capacities and jobs, and the sustained favourable financing conditions and stepped-up execution of government capital expenditure.

The NBS has raised its GDP growth projection for 2021 from 6.5% to the range of 6.5-7%. In the medium term, the NBS expects GDP growth within the 4-5% range, which will facilitate further convergence towards EU countries, the central bank concluded.

The latest poll of CFA Society Romania members in December revealed a slightly more optimistic sentiment than in the previous month.

Central bank says spread of Omicron variant has only had a small impact on the economy.

Poland’s Q4 economic growth poised to be strongest in region