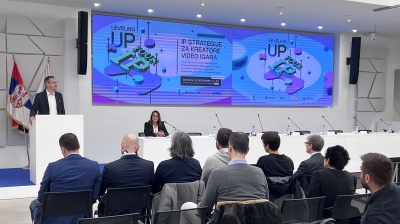 Serbia’s video game development industry generated revenues of around €125mn in 2021, Mihailo Vesovic, director of the sector for strategic analysis, services and internationalisation at the Chamber of Commerce and Industry of Serbia (PKS), told an event on September 22.

Serbia is an emerging high-tech hub that is especially strong in blockchain and game development. Among the major global game developers in Serbia are Endava and UbiSoft, while there are also successful local companies such as Belgrade-based mobile games developer Nordeus, which was acquired by Take-Two Interactive for $378mn in 2021.

"With more than $200bn a year, the video game industry in the world and in our country is starting to be a huge force of development. More than 130 companies in Serbia employ about 3,000 people in this industry," Vesovic told the Level Up your IP: 101 Strategies for Videogame Developers meeting, a statement from the PKS said.

Vladimir Maric, director of the Institute for Intellectual Property, said that 5% of the GDP in Serbia is created by creative industries, and half of that amount comes from the ICT sector.

Globally, the gaming industry is predicted to be worth around $330 billion in 2026, and the number of gamers in the world will soon reach 3bn, according to the PKS.

Virag Halgand, head of the Department for Central Europe and Baltic and Mediterranean countries at the World Intellectual Property Organisation, noted that the video game industry has shown resilience over the last two years, and that demand is growing and not decreasing.

Mongolian government accused of rushing through veiled law that dismantles freedom of speech
Employees claim Bulgarian Facebook moderators controlled by Russia
EWDN: A year in review – How Ukrainian tech resisted the war in 2022