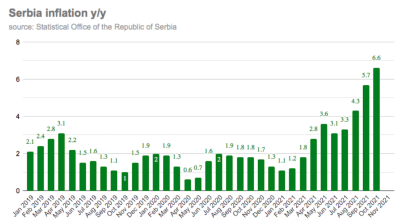 Inflation has been accelerating in Serbia since the beginning of the year.
By bne IntelliNews November 30, 2021

Inflation in Serbia in April-July 2021 was within the planned range, but in August it began to rise and in October consumer prices reached 6.6% compared to the same month last year, the National Bank on Serbia said on November 29. Inflation will be somewhat higher at end-2021 and in H1 2022 than envisaged in the central bank’s August projection, primarily due to higher vegetable prices, further growth in global prices of primary commodities and cost-push pressure.

“The rise in inflation in the second half of the year was expected and announced in the August inflation projection; however, the seasonally uncommon rise in the prices of unprocessed food, attributable to high temperatures and the drought, as well as the unexpected further growth in global oil prices, drove inflation up to a higher level relative to the August central projection,” said the governor of the National Bank of Serbia, Jorgovanka Tabakovic, at a presentation of the bank’s inflation report.

After moving around the target midpoint in Q2 and July, year-on-year inflation in Serbia continued at a faster pace in the remainder of Q3 and measured 5.7% in September, said the inflation report.

Core inflation (measured by the change in CPI excluding prices of energy, food, alcohol and cigarettes), which is most affected by the monetary policy, was significantly lower than headline inflation, measuring 2.6% year on year in September.

According to the new projection from the NBS, while inflation will be higher at end-2021 and in H1 2022 than envisaged in the August projection, inflation growth is still, as in other countries, mostly assessed as temporary.

Inflation should retreat within the lower part of the target tolerance band by end-2022 and remain there until the end of the projection horizon, the NBS said. However, there are still high cost-push pressures from the international environment and their duration is difficult to estimate, as they are affected by many factors. The NBS said it will therefore continue to carefully monitor and analyse trends in the international commodity and financial markets and to assess their impact on domestic economy. NBS stands ready to respond adequately, in case of need, with all available monetary policy instruments, in order to maintain price and financial stability, the Inflation Report said.

“As a response to global cost-push pressures being higher than anticipated and spilling over onto the local market, the NBS took steps towards reducing the degree of monetary policy accommodation in order to limit the growth of inflation expectations going forward and their spillover onto the prices of other products and services,” Tabakovic said.

“Using the flexibility of the existing monetary policy framework to change monetary conditions without changing the main interest rates, as of October the NBS raised the average effective rate in auctions of the repo sale of securities by 17 bp, hence it currently measures 0.28%. Also, repo purchase auctions of securities, which provided dinar liquidity to banks, were discontinued in October.”

Unemployment slightly rose in Czechia in July
1 hour ago
Moldova’s maize, sunflower crops decimated by drought
2 hours ago
North Macedonia’s annual inflation accelerates to 16% in July
15 hours ago
Romania’s central bank slows down monetary normalisation cycle with a 75bp hike
1 day ago
Hungary's industrial output picks up in June, but outlook mixed as economy set to slow down
1 day ago