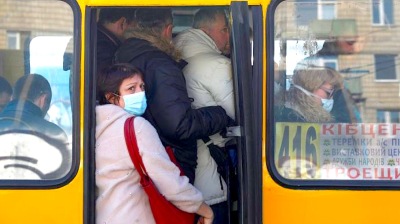 The number of new infections of coronavirus have been at record levels for five days in a row as a second wave hits the country
By bne IntelliNews June 15, 2020

Ukraine has recorded record-high new infection rates for five days in a row as it appears a second wave of infections has hit after the government eased restrictions in the last weeks.

The number of coronavirus cases in Ukraine rose by 656 in the past 24 hours and the daily number has been steadily exceeding the 600 mark for the past five days, Ukrainian Health Minister Maxim Stepanov said on June 15, as cited by Tass.

"Over the past 24 hours, 656 people fell ill. In a single day, 12 fatalities were also reported, while 171 patients recovered from the virus," the minister said.

"We see that the number of confirmed coronavirus [COLVID-19] cases in the past five days was consistently over 650. On one day, we had 753 [new] cases. We set record-high infection rates," the minister continued.

The virus was late to arrive in Ukraine, largely imported from Europe by travellers returning from holiday or work abroad. With a weak and underfunded public health care system the government was quick to impose restrictions on movement and enforce social distancing and has managed to keep the number of infections to an order of magnitude less than in Russia, despite having a large population of over 43mn people.

However, with its economy still trying to recover from an almost total meltdown in 2015 the government has been under enormous pressure to open up again as soon as possible, as it simply doesn't have the reserves or the resources to sustain a prolonged lockdown. The government has been lifting restrictions in the last weeks and today Boryspil International Airport was re-opened as the latest easing measure. The use of public transport was allowed last week.

However, it seems the government has acted too soon, as infections have soared as a result.

Stepanov called on Ukrainians to "not mistake easing of lockdown with its lifting." Since the epidemic broke out in Ukraine, 31,810 people have been confirmed to have contracted the virus, 14,523 patients have recovered, while 901 coronavirus-related fatalities have been recorded.

The weaker economies are the most vulnerable to second waves and a re-imposition of the lockdown regime would be extremely damaging for the Ukrainian economy. Other countries that have imposed strict lockdowns and encouraged their populations to be responsible have managed to keep the restrictive period to a minimum, but those with less discipline will suffer for longer.