Scotland's bid to become an investment hub for Emerging European markets has backfired after it attracted a number of shell companies that have funnelled the cash equivalent of at least a tenth of Moldova's entire economy out of the tiny country.

Moldova is in the midst of a financial crisis and recently arrested 28-year-old businessman Ilan Shor over a scandal in which more than $1bn was transferred out of the country through a series of fake loans. The government hired high-powered corporate investigators Kroll to investigate the fraud at the three Moldovan banks involved, which highlights the use of Scottish shell companies in the sophisticated money-laundering schemes employed by the fraudsters to wash their ill gotten gains.

The Kroll report points the finger at Russian-Israeli businessman Shor and highlights the extensive role of Scottish shell companies in the scheme. Shell companies named in the report also have links to a series of previous massive Moldovan bank frauds, suggesting that well-placed Moldovan insiders, who have been robbing the country for a decade, may in fact have directed the latest and largest scam.

According to Kroll, Scottish-registered shell companies – owned in turn by offshore companies and mostly with straw men as directors – were used alongside Latvian banks and Russian structures to siphon off around $1bn from three Moldovan banks for the benefit of Shor in late 2014. As of the end of 2014, the three banks – Banca Sociala, Banca de Economii and Unibank – had a combined loan exposure of almost MDL1.8bn (€897mn), more than 10% of Moldova’s GDP, but had offered no collateral on the loans, and the money is now feared lost.

Shor himself is the son of a formerly prominent Moldovan businessman and enjoys the highlife in Moscow. He famously hired out the parliament buildings for his wedding to his well known Russian pop star wife Jasmine Shor. He was arrested in Moldova on May 6 and placed under house arrest for 30 days on fraud charges, which he denies.

Moldova has built up a reputation for being a banking black hole and was implicated in money laundering schemes during investigations following the Cyprus banking crisis in 2012-2013, which found the Moldovan banking sector has close ties with Russia and is routinely used to funnel money from Moscow to offshore accounts in EU member Cyprus. Latvia is another EU member that is frequently used in Russian money laundering schemes. Moldova has suffered from a series of massive banking frauds in the last two decades, eliciting a warning from the European Bank for Reconstruction and Development (EBRD) on one occasion over "suspicious transactions".

The latest $1bn scam attributed to Shor shares many features with these previous frauds, raising questions as to whether Shor was really the main beneficiary. What is unusual is Kroll's revelation of the extensive use of shell firms registered in Scotland for the first time.

While shell firms registered in England and Wales are a frequent occurrence in international money-laundering cases, especially with an Eastern European connection, Scottish shell companies are rare, because Scotland is a separate jurisdiction with its own Roman law based legal system. “I don’t recall ever seeing a UK shell company registered in Scotland,” says UK investigator Andrew Bousfeld, co-author of a study of UK shell companies and money laundering.

Experts from anti-corruption NGO Global Witness, one of the main campaigners against UK shell companies, concurred that Scottish shells are very rare. According to Luca Cerioni, lecturer in tax law at Edinburgh University, this is because of the different legal traditions regarding partnership law and liability.

But there has been a proliferation in the use of Scottish shell companies at a few select addresses, bizarrely almost entirely involving another small country at the opposite corner of Europe: Moldova. A total of eight shell companies named in the Kroll report as vehicles for money laundering are registered in Scotland’s stately capital of Edinburgh, and four in the picturesque Highland town of Inverness.

A series of hostile takeovers of banks in Moldova in 2011-2012 then seems to have pioneered the mass use of a number of Scottish companies, alongside the ‘traditional’ shell companies from England.

Edinburgh firms Victoria Invest Limited, Financial Investments Corporation Limited, and Maxpower Invest Limited were all named in connection with the alleged expropriation and subsequent transfer of stakes in Moldova’s banks, with some of the expropriated shareholders bringing a court case in London.

A bne IntelliNews investigation of the 2011-2012 ‘bank raids’ cited a lawyer for the expropriated shareholders as saying that a company called Suntiger ordered the incorporation of the UK shell firms, both in England and in Scotland.

According to documents produced by a London high court disclosure order, seen by bne IntelliNews, Maxpower Invest Limited was registered at the 41 Duke Street, Edinburgh address, while Financial Investments Corporation Limited was registered at the 71 Brunswick Street address. The nominee shareholder in Maxpower Invest was listed in the documents with an Edinburgh address at 18/2 Royston Mains Street.

A court disclosure order in 2012 revealed that the beneficiary owner of both Financial Investments and Maxpower Invest was Vlad Plahotniuc, Moldova’s richest man and at the time deputy first speaker of Moldova’s unicameral parliament. Bank shares expropriated in Moldova by dubious court decisions had been allegedly parked with these companies, according to the plaintiffs. Plahotniuc told bne IntelliNews at the time that the documents had been forged and denied any wrongdoing.

Notably, these very same Scottish addresses feature in the latest massive Moldovan bank money-laundering case, as analysed by Kroll. Thus one of the Scottish shell companies involved, Manitoba Management Limited, was registered at the 41 Duke Street address; another two companies, Dixon Corporation and Ayden Management Limited, were registered at 69 Brunswick Street and 71 Brunswick Street, respectively. Two other firms named in the Kroll report, Fortuna Limited and Novland Limited, were registered at the 18/2 Royston Mains Street address.

The very same Edinburgh addresses featured in an even bigger money-laundering scheme operating from 2010-2014, whereby $20bn in dirty Russian money was moved via Moldova to Latvia, as described in 2014 by the Organised Crime and Corruption Reporting Project (OCCRP).

One of the companies featured in the OCCRP investigation, Westburn Enterprises, was likewise registered at 71 Brunswick Street in Edinburgh. Half a billion dollars was moved from Russia companies to Westburn accounts at Latvia’s Trasta Kommercbanka, according to the OCCRP investigation, after Moldovan courts ordered the Russian companies to come good on a loan guarantee. The funds were then moved through a Moldovan bank, Moldincombank, owned by the controversial businessman, Veaceslav Platon.

The same three Scottish shells – Westburn Ventures, Roslin Enterprises and Caldon Holdings – featuring in the OCCRP investigation have likewise been involved in similar schemes in which funds were siphoned from Ukraine and Moldova’s energy sector using Moldovan court decisions.

These schemes are documented in Ukraine’s database of litigation, linking the Scottish shell companies to machinations on the part of well-connected Moldovan insiders.

Thus Westburn Ventures was part of a scheme in which $30mn was siphoned from Ukrainian company TOV Energoalliance - a supplier of equipment to Ukraine’s state power generation company in 2009-2012 - by a combination of loans and guarantees enforced by Moldovan courts. Ukraine’s state-owned Cherkass chemicals plant also placed millions of dollars in orders for materials with Scottish shells Caldon Holdings and Roslin Enterprises, according to Ukrainian court records.

Doran Chirtoaca, Mayor of Chisinau, called this at the time “a bandit attack that protects the interests of a number of Moldovan citizens led by Veaceslav Platon,” as reported by the press.

Platon is reported in the media as being allied with Plahotniuc, and as an expert in combining UK shell companies with Moldovan and Ukrainian court decisions for business advantage – in particular in Ukraine’s state-owned energy sector.

Platon could not be reached for comment on his connection to the Scottish shell companies and there is no evidence of his involvement in the latest bank frauds.

What does this tell us about the Kroll report on Moldova? The mechanisms used for shifting the funds from BEM and Banca de Sociala – in particular the tell-tale use of Scottish shell companies established at the same addresses – repeat the mechanisms used in previous corporate raids and major money-laundering schemes in Moldova. This suggests that at least the engineers of the scheme were high-placed Moldovan insiders. But why would high-placed insiders implement such a scheme for the benefit of an outsider such as Shor? Or is Shor rather a proxy or fall guy for them?

Smoke and mirrors is one of Moldova's national industries alongside wine, this affair being a prime example. The Kroll report was leaked to media by none other than Adrian Candu, speaker of Moldova's unicameral parliament and tipped as a future prime minister. Candu is also reportedly Plahotniuc's godson. 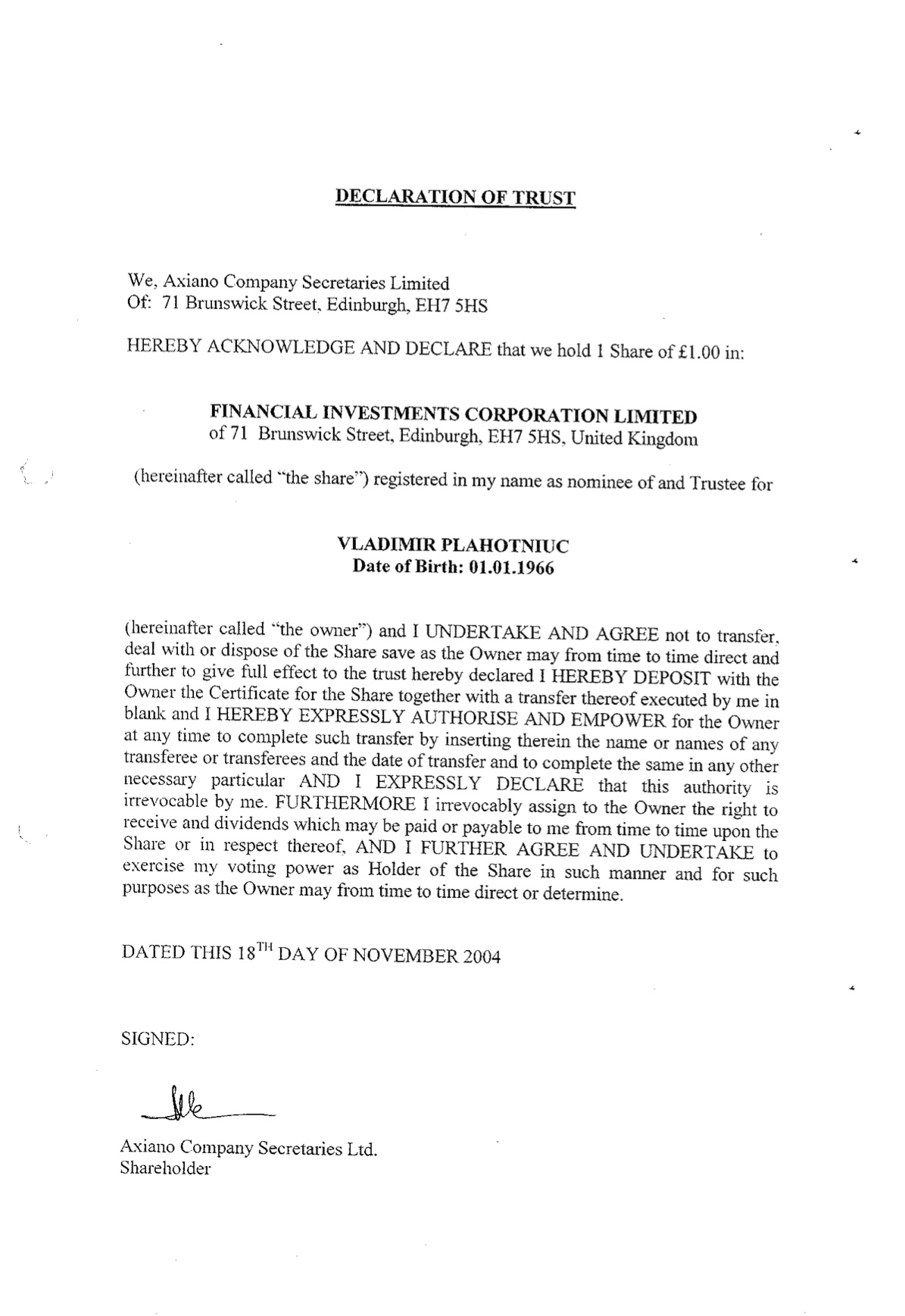 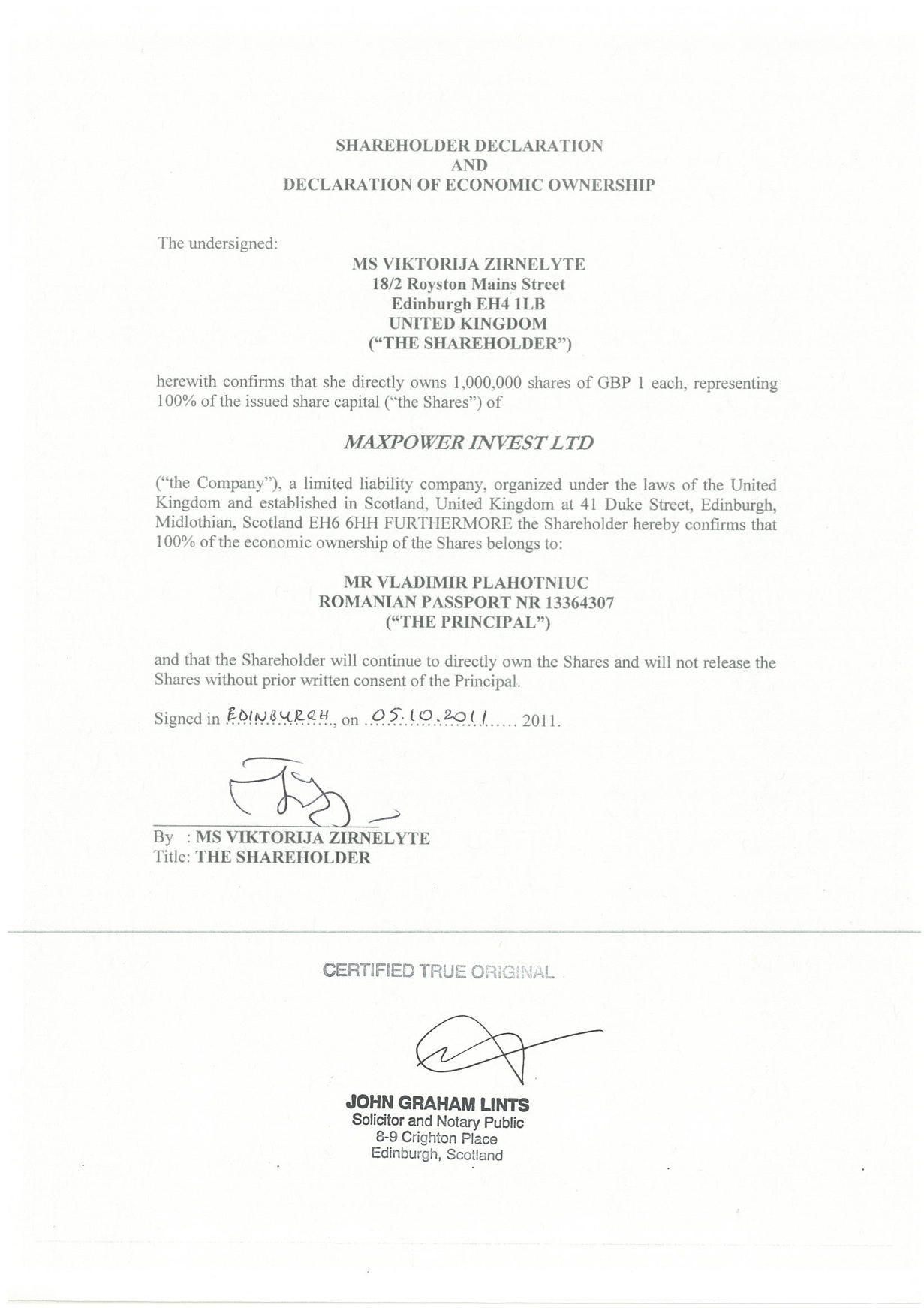 Graham Stack in Berlin - A Latvian financier linked to the mass production of Scottish shell companies has denied to bne IntelliNews any involvement in the $1bn Moldovan bank fraud that has caused ... more