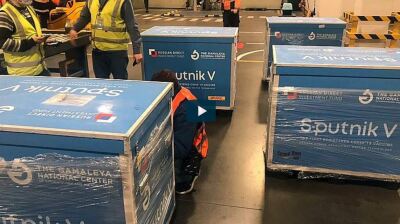 There has been controversy over the way Russia gave rapid approval to its own vaccine and the way it allegedly tested it on soldiers and public sector workers.
By bne IntelliNews April 9, 2021

The row over Slovakia's procurement of Russia's Sputnik V vaccine, which has already brought down one prime minister, has erupted again after the Slovak testing agency conducted laboratory testing of the shipment, leading the Russian side to demand its return.

Slovak Finance Minister and former prime minister Igor Matovic said he was asked by Moscow during his trip on April 8 that Slovakia should return the Russian vaccine Sputnik V because the country had violated the contract when the Slovak Academy of Sciences (SAV) tested the Russian Sputnik V vaccine.

Matovic added that he will present more details from his trip to Moscow at a press conference on April 9. Matovic called the opponents of Sputnik V´s use in Slovakia "idiots for having taken the health of a million people in Slovakia hostage". "You can pop champagne," Matovic wrote.

Russian agency RIA Novosti reported earlier that the Russian Direct Investment Fund (RDIF) asked Slovakia to give the batch of Sputnik V back.

The Russian demand shows the country's sensitivity on the issue of the testing of the Sputnik V vaccine. The European Medicines Agency (EMA) has yet to give its approval of the vaccine for use in the EU after it said the Russian side was slow in providing documentation. There has also been controversy over the way Russia gave rapid approval to its own vaccine and the way it allegedly tested it on soldiers and public sector workers, who may not have been real volunteers nor a true cross-section of the future vaccination group.

The Slovak State Institute for the Supervision of Medicines (SUKL) has been reluctant to give its own approval to the use of the vaccine without EMA authorisation but it began to conduct tests under pressure from the government. These tests found that the vaccine shipment differed from the doses sent for testing to the EMA and to the British medical journal The Lancet,  provoking Russian anger.

The SUKL argues that it wasn't told by anyone in authority that the testing of the vaccine would constitute a violation of the contract.

She stressed that the content of the classified contract signed between RDIF and the Slovak government is not available to SUKL. Jurkemikova also said that an official laboratory network supervises the quality of vaccines registered in the EU, while Sputnik V has been registered neither in Slovakia, nor in the EU.

"SUKL asked 30 official laboratories for the supervision of medicines and vaccines in the EU and an accredited laboratory of the SAV's Biomedical Centre for co-operation," she noted, adding that all the EU labs did not have capacity, so the vaccine was eventually checked by the SAV.

On April 8 SUKL said that it cannot adopt an expert stance on the ratio of benefits and risks on Sputnik V, which had triggered a political crisis in Slovakia, due to incomplete or inaccurate information from the producer and the inability to compare the vaccine doses used in various studies.

The lack of and inconsistency of the data has made it impossible to adopt a conclusion on the benefit-risk balance. "Despite repeated requests, the manufacturer of Sputnik V failed to provide data from pre-clinical testing, manufacturing (including data on drug manufacturing, final product, vaccine stability, storage and expiration) and clinical testing, which chiefly includes safety and efficacy data," said SUKL head Zuzana Batova.