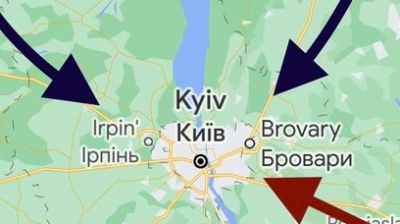 Western fears of a Russian invasion of Ukraine from Belarus are increasing as Russian troops concentrate in Belarus’ Gomel region. Meanwhile, Zelenskiy plays down war fears saying that no war is imminent.

On January 17, Belarus President Aleksander Lukashenko announced that a military exercise with Russia would take place along Belarus’ southern and western borders. The exercise was named “Allied Resolve”, most likely in a reference to the 2014 Nato exercise “Atlantic Resolve”. The exercise is allegedly being held to practise a specific “action plan” against the Baltic states, Poland and Ukraine. This new Russian military presence along Ukraine’s north-western border with Belarus effectively encircles Ukraine, with Russian soldiers ready to move into the country from any direction.

A retired American general drew a parallel with Russia’s troop deployment in Belarus with that of Russian troops being “parked in central Virginia, facing Washington.” This situation is reminiscent of when Russia held its “Caucasus Frontier 2008” exercises in response to the US-Georgian exercise “Immediate Response 2008”. Shortly after the exercises, Russia invaded Georgia.

The announcement of “Allied Resolve” has increased the West’s fear of a Russian invasion, with US Secretary of State Antony Blinken saying that Russia could attack “at very short notice”. US officials have been worried that Russia might launch an invasion from Belarusian territory. According to a State Department official, it would be dangerous for Lukashenko to step away from Belarus neutrality commitment, since this concept is believed to have widespread support among Belarus’ elite.

The fears of Belarus dropping its neutrality commitment are not unfounded. Since August last year, Lukashenko has been threatening to deploy both Russian nuclear weapons and to take out the neutrality commitment from the country’s constitution. A statement by Lukashenko made in December last year comes to mind when speaking about US’ accusations over Russia’s military build-up along Ukraine’s borders. During a press conference, he said that big changes would be seen from the Black Sea all the way to the Baltic Sea, and that some “very large” outcomes would happen after the new year.

Moreover, the Telegram Channel Motolkohelp reported yesterday that the Russian troops that have been moving into Belarus during the week have not at all been placed in the officially announced areas for the exercise “Allied Resolve”. Instead, troops have been concentrated heavily in the South-Eastern (Gomel) region of the country, coming dangerously close to Kiev.

On the picture, Russian troop deployments in Belarus are shown in red, while the officially announced areas for the "Allied Resolve" exercises are shown in blue. This troop positioning creates a clear threat to Kiev, and Russian missile transfers to the Minsk and Gomel regions have put Ukraine within close range of Russia's BM-27 220mm multiple rocket launchers. By advancing from the north-west, Russian troops wouldn’t have to cross the Dnieper if attacking Kiev, a crossing which could be tricky when coming from the east.

The possibility of a Russian invasion from Belarus has been dismissed as “nonsense” by Russia’s Foreign Ministry’s spokesperson Maria Zakharova. During a press briefing yesterday, she said that even suggesting this risk called the American education system into question and that the West had repeatedly presented speculations as facts.

Again, a previous statement attributed to Vladimir Putin, from Michail Zygar’s 2016 book “All the Kremlin’s Men”, comes to mind. According to eyewitnesses, Putin, during a closed meeting with George W Bush during the Nato 2008 Bucharest Summit, snapped when Ukraine was brought up. Putin is quoted to have said that “it’s not even a country!” continuing with “a part of its territory is what is called ‘Eastern Europe’ and a part, an important part, they have received from us!” His short public speech at the summit ended with “If Ukraine joins Nato it will be without Crimea and the eastern parts of the country – Ukraine will simply fall apart”.

So what can happen?

As a retired US general recently said, the placing of Russian troops in Ukraine has been made to put extreme pressure on Kiev. The situation is again reminiscent of the Russia-Georgia war of 2008. In Zygar’s book, Dmitri Medvedev is attributed a quote cited from an interview in 2011, saying that the Russian troops were stopped from moving into Tbilisi because the objective never was to capture any specific city. Instead, Medvedev said that the “peacekeeping operation” was done in order to end the aggression which Georgian President Mikheil Saakashvili had initiated.

The populations in Russia and Ukraine are reportedly largely dismissive of the prospective of the imminent outbreak of war, which they believe is unlikely. Ukraine’s President Volodimir Zelenskiy said in a recently released video that the real attack, he said, is not on Ukrainian land, but on its people’s “nerves,” and asked: “Didn’t the invasion start in 2014?” continuing with “These risks have existed for more than one day, and they have not become bigger.”

According to Zelenskiy, the reports of war are being used as a tactic to weaken Ukraine and attempt to force it into concessions. However, despite playing down the threat of war, he reassured his compatriots that the country is “constantly strengthening its defence capabilities” while striving for a “diplomatic solution.”

Bne IntelliNews has reported that a full-scale invasion of Ukraine by Russia remains highly unlikely. This is because the costs to Russia of an invasion – in economic, political, and human lives – would be extreme, something that because of Russian President Vladimir Putin’s slowly falling approval and trust ratings at home must appear extremely unappealing to the Kremlin. Also, while Russians overwhelmingly have supported the annexation of Crimea, they are a lot more uncomfortable with the war in Donbas.

Russian President Vladimir Putin has called on BRICS countries to support Russia in the face of "selfish actions" from the West. The summit of BRICS leaders is being hosted by Beijing via videolink.