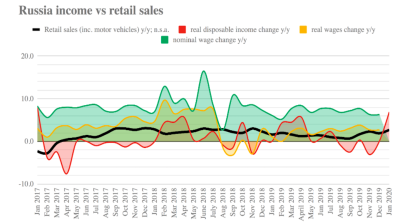 Growth in Russian retail sales accelerated to 2.7% y/y in January after real wage growth in December accelerated to 6.9% y/y, the highest rate in almost two years.
By Ben Aris in London February 21, 2020

There was strong growth in Russian consumer demand in January as real disposable incomes begin to rise again.

Real wage growth in December accelerated by the highest rate in almost two years (6.9% y/y), BCS GM reported, while the unemployment rate in January remained at post-Soviet lows of 4.7%, down slightly from 4.9% in January 2019.

Consumption is returning as an economic driver, but is not expected to fuel a boom as it did in the noughties. Analysts are expecting incomes to continue to rise this year as President Vladimir Putin has said on many occasions recently that the top priority is to boost income levels in 2020. The state is expected to unleash heavy spending this year to support GDP growth and income growth.

At the same time, the dynamic of output in the real sector of the economy is more modest, as the economy waits for the transformative effects of the state investment programme to take effect.

Industrial production was up by only 1.1% y/y in January, reduced by the effects of an exceptionally warm winter. Agricultural output was up 2.9% y/y and volumes of construction up 1% y/y. Cargo transportation was down 4.4% y/y, not least due to contraction in export volumes of commodities, reported BCS GM.

“Good news, albeit not surprising. To a large extent, the strong performance in the consumer segment of the economy was driven by the weak base factor – in early 2019, consumer sentiment was hit by the VAT increase that pushed real income growth into the negative. The warm winter in 2020 also helped to boost volumes of services and housing construction – the latter trend is also supported by rising output of construction materials. At the same time, we note that the month of January is traditionally the least representative for the direction of growth, as the data tends to be distorted by seasonality effects. Still, we continue to forecast gradual improvement in the consumer sentiment in FY20, which, along with higher volumes of fixed investment, should help the economy to grow 2% y/y,” Vladimir Tikhomirov, chief economist with BCS GM, said in a note.

Central bank seen as set to opt for more easing but all eyes are on floundering lira. If it falls much further it could limit room for policy support.

The IHS Markit Russia Services Purchasing Index (PMI) index crashed to a new all-time low as the double whammy of an oil price collapse and the stop-shock caused by the coronavirus pandemic hit the services industry.

The coronavirus pandemic drove the decline of the indicator, which is likely the first in a series of steeply deteriorated macroeconomic readings to come out this month.

Oxford University researchers look at the steps taken to contain the spread of COVID-19.

Ukraine’s Economy Ministry has dramatically downgraded its 2020 macroeconomic forecast and predicts a 3.9% y/y contraction in the economy in 2020, down from its previous prediction of 3.7% y/y growth at the start of the month.

Oil price crash takes 0.5pp off Turkey’s inflation rate
8 hours ago
Russia Services PMI index crashes to a new all-time low of 37.1 in March
1 day ago
Poland’s PMI the first indicator pummelled by COVID-19
3 days ago
Balkans have some of the world’s strictest anti-coronavirus measures
4 days ago
Ukraine's Economics Ministry forecasts 3.9% economic contraction in 2020
5 days ago