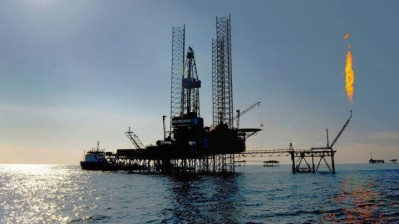 Word of the immense potential of the Chalous field is spreading. / Tehran Times.
By bne IntelIiNews November 16, 2021

A finalised deal to develop Iran’s multi-trillion dollar new gas discovery, the Chalous field in the Caspian Sea, is reportedly regarded by Russian officials “as the final act of securing control over the European energy market”.

Russian companies will hold the major share in the deal, followed by Chinese companies, and only then Iranian companies, sources close to the agreement were reported as saying by OilPrice.com on November 15. The trade publication also reported that new calculations show that Iran, taking into account new estimates of the gas contained in Chalous, looks set to be soon recognised as holding the world’s largest gas reserves, dropping Russia into second place.

Explaining why Iran would relegate itself to third place behind Russia and China in the development and exploitation of Chalous, the media outlet said that the Islamic Revolutionary Guard Corps (IRGC)—the Iranian entity essentially controlling field development companies that will participate in Iran’s side of the deal—"has stated in a series of internal discussions within the Iranian government recently that the new terms of the Chalous deal that have placed Russian and Chinese interests above those of Iran are ‘the price we have to pay for Iran’s access to the technology and manufacturing capacity required for our missile program’.”

It added: “To gain effective control over these new Iranian gas flows through securing such a stake in Chalous, Russia privately assured Iran that, in addition to development and exploration expertise, and some funding, it will also ‘seek to support Iran’s interests in the matter of the JCPOA [Joint Comprehensive Plan of Action, or nuclear deal] and in other matters at the UN’.”

Russia’s Transneft has, meanwhile, purportedly in the past two weeks projected that supergiant Chalous alone can provide up to 72% of all of the natural gas requirements for Germany, Austria and Italy every year for the full 20 years that the Chalous deal is set to run, while Chalous alone could supply up to 52% of all of the European Union’s gas needs over the period.

Previously, the estimates of Iran and Russia were that Chalous contained around 3.5 trillion cubic metres (tcm) of gas in place, equating to around one-quarter of the 14.2tcm of gas reserves contained in Iran’s supergiant South Pars natural gas field in the Persian Gulf that accounts for around 40% of Iran’s total estimated 33.8tcm of gas reserves.

OilPrice.com reported that it has learnt that, following further studies by Russia, the Chalous discovery is now seen as essentially a twin-field site, with the fields nine kilometres apart, with ‘Greater’ Chalous having 5.9tcm of gas in place, and ‘Lesser’ Chalous having 1.2tcm of gas, giving a combined figure of 7.1tcm.

“Therefore,” the publication said, “the new Chalous figures would give Iran a total natural gas reserves figure of 40.9tcm, whilst Russia – for a long time, the holder of the largest gas reserves in the world – officially has just under 48tcm. That Russian figure, though, has not been revised to account for usage, wastage, and gas field degradation for many years, and, according to Russian gas sources, is around 38.99tcm as of the end of 2020. Consequently, the Chalous find makes Iran the biggest gas reserves holder in the world.”

Following both the upgrading of the gas reserves estimates in Chalous and spiralling gas prices across Europe of late, the new stake split in the combined Chalous twin-sites is reportedly as follows: Russia’s Gazprom and Transneft will together hold 40%, China’s CNPC and CNOOC a combined 28% and Iran’s Khazar Exploration and Production Company (KEPCO) 25%.

“Gazprom will have overall responsibility for managing the Chalous development, Transneft will do the transportation and related operations, CNPC is doing a lot of the financing and providing the necessary banking facilities, and CNOOC will be doing the infrastructure parts and engineering,” said one quoted source.

Given the likely length of gas recovery at Chalous – and the fact that Russia intends to take less than 10% of it out over the course of its 20-year deal –sources close to the deal estimate the total value of the Chalous gas site at $5.4 trillion, OilPrice.com said.

Croatian president says Western sanctions aren’t working
2 hours ago
Kosovo’s PM Kurti says risk of new conflict with Serbia is high
2 hours ago
End of Vienna talks means US, Iran political approvals now needed to revive nuclear deal
11 hours ago
Western capitals wonder what kind of sanctions deal Erdogan may have cooked up with Putin
1 day ago
Leaders of Serbia and Kosovo to meet as they pull back from brink of conflict
1 day ago