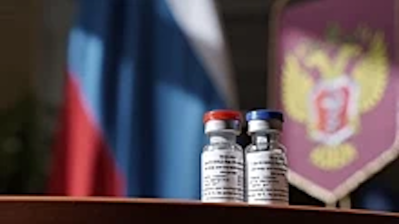 Gam-COVID-vac vaccine bottles. The vaccine candidate will soon be registered in Russia under the Sputnik V brand.
By bne IntelliNews August 12, 2020

President Vladimir Putin announced on August 11 that Russia will officially register the Gam-COVID-Vac vaccine developed by the Gamaleya laboratory and to be marketed in Russia and abroad under the Sputnik V brand.

As reported by bne IntelliNews, since the beginning of the coronavirus (COVID-19) pandemic Russian digital and investment majors have actively engaged in the race for vaccine development.

The first company to be producing the vaccine together with Gamaleya will be Binnopharm of the AFK Sistema multi-industry investment conglomerate, with potential scaling up to other factories.

According to the Russian Direct Investment Fund (RDIF) that co-financed the development of the vaccine, it will now be going into the final third stage of the final trials, with first vaccinations possible in October 2020.

The approval of the vaccine in the absence of the third stage trials was sharply criticised by the foreign press as reckless, as so far it has been tested only on 76 participants.

Notably, according to Putin's announcement, the vaccination would be voluntary in Russia. Previous surveys showed that as much as one in three (37%) Russians would refuse to take a COVID-19 vaccine should one be made available.

As for AFK Sistema, BCS Global Markets on August 11 commented that no "meaningful value accretion for Sistema’s NAV [net asset value] from Binnopharm taking part in vaccine production" is seen.

BCS GM analysts believe that positive market reaction for Sistema is not fully justified, as vaccine production would only less than 1% of NAV. Binopharm previously commented that it has capacity for producing 1.5mn doses a year.

"However, we believe this project is more about social responsibility than Ebitda accretion, and note that the fact that Binnopharm was among first ones chosen to implement this socially important project is slightly positive for sentiment," BCS GM wrote.

BCS GM also estimates that possible pricing of the vaccine for sales abroad could vary at about RUB300-1,000/dose ($4-14), as compared to previous estimates by the Financial Times of planned vaccine prices by foreign pharma majors (Moderna $25-30/dose, Pfizer/ BioNTtech $19.5, AstraZeneca $3-4).

Vedomosti daily reminds on August 12 that global demand for COVID-19 vaccine exceeds 3bn-5bn doses. Should Sputnik V successfully pass the trials, Russian producers could supply up to 1bn doses abroad by the end of 2021.

Even the head of RDIF, Kirill Dmitriev, admitted to Vedomosti that Sputnik V was developed "exceptionally fast", as usually the full cycle of vaccine development and trials takes up to four years.

Analysts and experts surveyed by the daily also could not recall other examples of such fast vaccine development and warned that absence of a post-trial observation stage could lead to overlooking potentially dangerous complications or side-effects of Sputnik V.

But Dmitriev suggested that vaccinated Russians would be able to monitor their post-vaccine condition through a special app on their mobile devices. Sputnik is based on Gamaleya's six-year research into vaccines against Ebola and MERS viruses.

FPRI BMB Russia: the ruble continues to tank
World must tell Turkey to “get out” of Caucasus says Armenian PM
Are the Caucasus energy assets in danger from a war in Nagorno-Karabakh?

UK, Canada impose sanctions on Lukashenko and his top officials
13 hours ago
Poland tightens restrictions in response to rising coronavirus cases
14 hours ago
World must tell Turkey to “get out” of Caucasus says Armenian PM
17 hours ago
French President Macron promises Belarus’ opposition leader Tikhanovskaya to do all he can to help
1 day ago
Nobel laureate and Coordinating Council member Svetlana Alexievich leaves Belarus for medical treatment in Germany
1 day ago