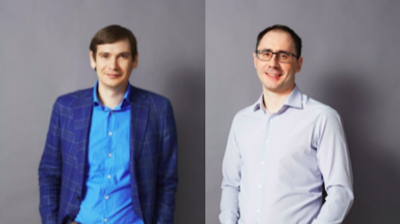 Artem Yamanov (left) and Alexander Emeshev (right) are the co-founders of the new fintech project.
By bne IntelliNews February 7, 2020

Leading Russian consumer lender TCS Group, which operates Russia’s only pure online bank Tinkoff, will invest in the fintech project launched in Europe by two of its managers.

As reported by bne IntelliNews, the capitalisation of TCS topped $5bn in London this week. The bank’s investment case is seen as solid, as it has transformed from credit card monoliner into an ecosystem of financial and lifestyle services.

Now TCS will be the key investor in the fintech company founded by current managers Artem Yamanov and Alexander Emeshev (business development and new products development, respectively), who will also act as co-investors in the project.

The company is planned to be launched this year and will be providing non-credit financial products to European retail clients.

“A new project in TCS' European markets could be both a challenge and an opportunity in our view, although total TCS’ investments look minor at this stage – €25mn (circa 2% of equity and contributed in tranches),” BCS Global Markets commented on February 6.

Sberbank CIB also sees the investment as “a fairly small bet in the bigger scheme of TCS's business,” while stressing that “clearly it's going to be a challenge building from scratch in what is already a pretty competitive fintech environment in Europe,” even though “TCS has the necessary scalable and transferrable platform as a long-established pure online financial services provider.”

The main competitors such as Monzo, Revolut and N26 are all trying to rapidly expand into new markets, including the US, the bank notes. “While these companies have started to gain scale and traction - Revolut has around 8 mln customers and N26 5 mln - they are struggling for profitability, but this has not stopped them from achieving eye-watering valuations.”

The ex-TCS managers as founders and co-investors of the venture look encouraging, given their strong track-record, the analysts believe, but note that future contributions from TCS are likely.

In the meantime, former COO Stanislav Bliznyuk will take the role of head of business development and newly hired Pavel Khristolyubov will act as COO.

“It is also worth adding that the departures of Yamanov and Emeshev from their current roles are quite big losses from Tinkoff Bank's perspective, as they have been longstanding important figures within the business, with Yamanov there since the beginning,” Sberbank CIB warns.

TCS Group posted net income of RUB9.7bn ($153.3mn) in 3Q19 under IFRS, beating consensus expectations by 4% and achieving a return on equity of 56%. The bank continued its growth despite expectations of a slowdown in its consumer lending portfolio in 2H19, as it competes against Russia's largest banks, state-controlled Sberbank and VTB, on the digital front.

The next triggers for the name are seen coming with the publication of its 2019 IFRS results and 2020 guidance (March 11), possible inclusion in the MSCI Index (May) and strategic updates in the Strategy Day (April).