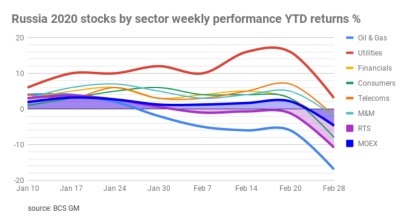 Russia's RTS stock market index tumbled to under 1,400 as markets opened today and has given up all its earlier gains from January, down by more than 10% since the start of the year as of the end of February.
By Ben Aris in Berlin February 28, 2020

The full impact of the coronavirus pandemic fears hit the Russian stock market in the last days of February. The leading dollar-denominated Russia Trading System (RTS) has crashed by 266 points from its peak in the third week of January and lost 60 points in just one day on February 27, while the ruble-denominated MOEX Russia Index likewise dropped like a stone, losing 311 points from its peak as investors sold off heavily.

The RTS has not only given up all the gains it made in the first three weeks of this year, when the market soared by over 10%, it is now in the red as the RTS index tumbled. Previously, the RTS rose over 1,600 for the first time in years and new recent high of 1,651 was set on January 20, but it has since crashed back below not only the 1,600 and the 1,500 benchmark levels but, as of the opening of trading on February 28, it was below the 1,400 mark as well.

There is still no sign of the dip-buyer that usually steps in following such a dramatic tumble in index values, as investors are standing on the sidelines, waiting to see how fast and far the coronavirus spreads now that it has entered Europe proper, following the outbreak in northern Italy reported this week. The market has moved from its regular swings where traders look to make a buck on the ups and downs to a simple scramble to get cash out that was last seen during the 2008 meltdown, says BCS Global Markets.

“The brutal [emerging market (EM)] stock sell-off is a liquidity seeking operation, last seen in 2008, rather than a fund flow/repositioning move. Stock investors have ignored risks for too long and are just awakening, while bond holders have yet to react. We see further downside – real panic not nearly here,” BSC Global Markets chief economist Vladimir Tikhomirov said in this morning’s note to investors.

Tikhomirov says part of the reason for the severity of the sell-off is that emerging market investors have been caught flat footed. EM funds took $1.5bn out of EMs last week, which, while it is the biggest outflow since August last year, is relatively little, suggesting most fund managers still saw the virus’ spread as an Asian, not a global, problem. That changed with the explosion of infections in Italy and the subsequent reports of infections appearing across Europe.

Ironically Russia itself has been largely unaffected, with only two reported cases, both Chinese nationals and both of whom have already fully recovered.

Even more pain has been inflicted in specific parts of the economy. Most noteworthy is that even the strong rally in utility stocks has come to an end. Until the last week of February utilities defied the sell-off on global markets as investors went “risk on” again and the sector, which was up by as much as 18% YTD only a week earlier, has also succumbed to the virus, though it is the only sector to still be showing gains this year, albeit with a weak 3% gain YTD.

The other sectors didn't fare as well. The RTS was down 10.9% YTD as of February 28 and the MOEX Russian index is down by a less painful 4.7% thanks to FX effects. But all the other sectors are down between 2% and 8%, with the oil and gas sector in a car wreck thanks to collapsing oil prices, down a whopping 17% YTD over the same period.

All the signs of panic selling are there: gold prices spiked to over $1,600 per troy oz, while oil prices fell to just under $52 per barrel. The ruble also sold off heavily against both the dollar and the ruble in the last week, and is currently down 7% and 5% respectively YTD to RUB66.28 to the dollar and RUB72.92 to the euro.

And the stock selling comes despite companies continuing to report strong revenue and profit growth. For example, Sberbank, an investors’ darling, reported $13bn of profit on February 27 and a return on equity of 20%, and yet its shares were already down this year by over 5% before the panic selling started in the last two days.

Oil prices are unlikely to see much relief in the short-term after Russia refused OPEC calls for emergency production cuts to counter the impact the virus fears were expected to have on oil demand. Even at $52 the Russian budget makes a profit and Russia’s leading oil companies have been pressuring the Kremlin to end the OPEC+ production cuts deal hammered out last year. The Kremlin is increasingly reluctant to give up the revenue it earns from oil exports as it needs the money for its 12 national projects programme.

The outlook for the markets remains uncertain in the short-term, but they should recover in the medium-term. The rate of infection in China is already slowing, according to Renaissance Capital that has been monitoring the situation. However, now the virus has entered Europe it is expected to spread rapidly, and the US has remained largely unaffected so far, but is very unlikely to escape infections.

While large parts of the population are expected to be infected, the virus remains dangerous only to the older population and those who already suffer from health issues. So far all the 17 deaths in Italy were exclusively of people over the age of 75.