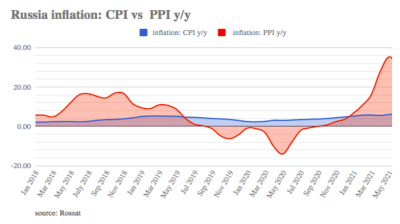 The inflation of Russian consumer prices has soared to uncomfortable highs, but those of producer prices have grown even faster, although the pace of growth has slowed somewhat in the last two months.

Producer prices took off at the start of this year from 6.7% in January as the inflation shock caused by the bounce-back from the coronacrisis set in. While consumer prices rose steeply from 5.2% in January to 6.7% in August, the rate of increase for business has been far higher.

“Both the annual and the seasonally adjusted monthly growth numbers continue to be driven predominantly by petroleum products and metals,” VTB Capital (VTBC) said in a note. “This time, the seasonally adjusted momentum slowed (to +1.1% month on month SA, from +3.1% m/m SA previously): metals within manufacturing decelerated to ­3.2% m/m SA from the prior +4.5% m/m SA, pulling the headline PPI momentum down.”

Central Bank of Russia (CBR) Governor Elvira Nabiullina said in an interview last week that she thought inflation had begun to be tamed and made a surprisingly modest 25bp rate hike in September, but also says that inflation has not been defeated and is expecting global inflation to be a lot more persistent than most of her central banking governor colleagues.

“Although the PPI run rate in food picked up, it remained below all of the October 2020-May 2021 values; furthermore, the 3-­month moving average momentum was visibly lower than in 1H21,” VTBC said.

The expansion shot up well above the consensus line of 13% y/y.

The PPI climbed to the highest point since the late 1990s.

Trade gap widened by 24% y/y to $5.83bn – which represents nearly one third of the estimated GDP last year.

Growth of output prices in Slovenia accelerates to 10.6% y/y in December

The producer price index (PPI) started to increase rapidly at the beginning of 2021.