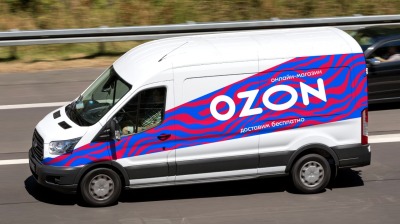 Meanwhile, the e-commerce company is in talks to re-structure its eurobonds. / Image: bne IntelliNews.
By bne IntelIiNews May 6, 2022

Russian e-commerce major Ozon has published its results for the Financial Year 2021. With order numbers and revenue up, the figures indicate that the company is set to continue gaining market share in 2022 in spite of the logistical difficulties posed by sanctions against Russia. Ozon also announced that talks with bondholders are underway with the hope of re-structuring obligations.

The standout figures include 223.3mn orders in FY21, which represents a 202% year-on-year growth, and full-year gross merchandise value (GMV) of RUB448bn (around $6.7bn). GMV is the total value of orders processed through Ozon and revenue from services to buyers and sellers on the platform.

Ozon saw a surge in sales during the pandemic, with the proportion of orders outside Moscow increasing sharply. It has since been investing heavily in expanding infrastructure beyond the capital, including new fulfilment centres and delivery services. The company also began cross-border ventures with Belarus and Kazakhstan in 2021.

In the first half of the financial year 2021, Russia’s three biggest e-commerce players (AliExpress, Ozon and Wildberries) accounted for 34.3% of the market. Now there are signs that the market leaders are growing their share still further. Ozon’s annual order frequency is up 61% compared to 2020, and revenue in Q4 was up 76% y/y.

The total number of sellers using Ozon grew by 250% in FY2021, which the company attributed to the development of logistics and fulfilment centres as well as a growing variety of marketplace models.

Sanctions imposed on Russian business by western countries this year in response to the invasion of Ukraine have complicated imports to Russia and made financial transactions with overseas partners almost impossible.

In a statement on its website, Ozon acknowledged that “these actions have had, and are expected to continue to have, a material adverse effect on our business, financial condition and results of operations and on the value and trading of the American Depositary Shares.”

Also included in Ozon’s results was an announcement that the company is in negotiations with bondholders over the possibility of re-structuring obligations worth $750mn.

A de-listing event for convertible bonds was triggered in early March by America’s Nasdaq exchange as it suspended the trading of all Russian ADSs in the end of February. As a result, Ozon announced that it hoped to re-structure its obligations, with a source close to the company telling bne IntelliNews that it would do its utmost to find a solution for bondholders, no matter how extreme the conditions.

The “put date” is 60 days after the delisting event, so the company has until the end of May to finalise its proposal to stakeholders. Ozon has confirmed that a large group of bondholders has formed an “ad hoc committee” to negotiate the terms of a potential re-structuring.

In a statement published online, the company warned that a combination of external sanctions and Russian capital control measures meant that sending money from its Russian accounts to foreign bondholders could be difficult.

The company stressed that transferring the funds necessary to redeem all its obligations could have an impact on Ozon’s operations and growth outlook.

A source with knowledge of the matter told bne IntelliNews that an agreement on amending the terms and conditions of current convertible bonds could avoid the potential pitfalls of one big transaction from Ozon’s account in Cyprus, while also allowing the company to continue to develop its operations and achieve future growth, which Ozon considers to be in the best long-term interests of its investors.

One bondholder told bne IntelliNews that Ozon's proposals are constructive, and have been positively received by many investors, with discussions continuing. The company itself mentioned in its annual report that it aims to “enter into a standstill agreement with a significant number of holders of the Bonds in the near term with a view to reach[ing] an agreement on the long-term restructuring of the Bonds within the current financial year”.