In February Yandex, the NASDAQ-listed Russian Internet giant, announced its unaudited financial results that show increasing diversification in its income
By EWDN in Moscow February 26, 2020

These results are below what analysts had pencilled in, pushing Yandex’s share price down 4% from recent record highs. Stocks in the tech behemoth were trading at $46.57 on Tuesday morning trading in New York.

Yandex’s diversification away from advertising revenues intensified, with ad income accounting for 69.4% of total revenues — down from 95.6% in 2016. The shift was led by a surge in income from the taxi segment, which now accounts for for nearly 22% of total revenues, compared with just 3% in 2016.

“Taxi segment” refers not only to Yandex.Taxi, the ride-hailing joint venture, which was formed with Uber in 2017. Yandex’s self-driving cars division (“SDC”) and foodtech businesses (including Yandex.EATs, Yandex.Chef, a meal kit subscription service, and Yandex.Lavka, a hyperlocal grocery delivery service) are also included.

This taxi segment turned profitable last year. Adjusted EBITDA was 271mn rubles in Q4 2019, up from negative 129mn rubles in Q4 2018. “The increase of adjusted EBITDA was driven by the improving profitability of our ride-hailing business, partially offset by investments in autonomous vehicles and food tech initiatives as we expanded our AV (autonomous vehicles) fleet and launched Yandex.Lavka service,” Yandex stated.

Other revenues are also on the rise. They grew 127% year-on-year in Q4 2019, accounting already for 11% of total revenues. The growth was primarily driven by the car-sharing service Yandex.Drive, subscription revenues of Media Services and the company’s IoT activities.

In terms of acquisitions, Yandex snapped up Q&A service TheQuestion and e-ticketing platform TicketSteam. Meanwhile, the Yandex.Taxi JV continued buying companies to strengthen its leadership across Russian regions and develop activities in the food delivery business.

Yandex.Taxi’s shareholders announced plans to go public through a dual-listing in Russia and the USA with a targeted valuation of $5bn to $8bn. The promising driverless car business will be developed through a separate company.

Yandex expects the new Russian law mandating the pre-installation of Russian software on smartphones and computers to have a positive impact on the company’s dominance in the search market.

The past year was not fully rosy for Yandex, however. Its alliance with Sberbank was obviously weakened after Yandex co-founder and main shareholder Arkady Volozh declined, in late 2018, the bank’s pressing offer to buy a major stake in the company. Sberbank’s friendly moves towards Mail.ru Group, Yandex’s archrival, all along 2019, were perceived as a potential alliance U-turn that could deprive Yandex from significant resources.

Even though some industry observers saw in Sberbank’s moves an “informal declaration of war” on Yandex, the two companies are still tied through two joint ventures: Yandex.Money, a market leader in electronic payment services, and the Yandex.Market group of companies, which operates e-commerce marketplaces. One of these, the Bringly cross-border platform, ceased activities in December 2019 as a consequence of market slowdown (see EWDN’s e-commerce report).

In late 2019, facing a long-standing government pressure, Yandex went through a major overhaul of its governance structure. A new “Public Interest Foundation” will be given veto power over significant ownership transactions. Through this and other provisions, the new ownership structure seeks to address the Russian government’s concerns that the NASDAQ-listed company — seen as a critical piece of Russia’s national online infrastructure — could be controlled one day by foreign shareholders. 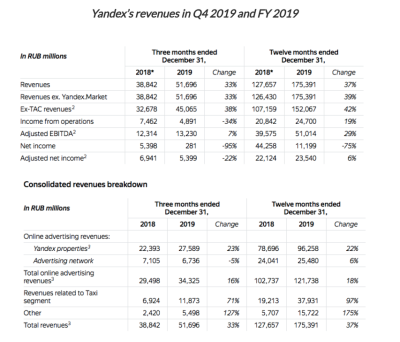