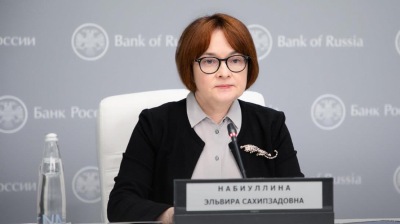 Russia's CBR gets tough on inflation and hikes rates 50bp to 5.5% in a new tougher tightening policy
By bne IntelliNews June 11, 2021

The board of the Central Bank of Russia (CBR) at the policy meeting of June 11 resolved to increase the key interest rate by 50 basis points (bp) to 5.5%, in line with expectations.

As reported by bne IntelliNews, only three months ago the consensus expected the key rate to increase to 5.5% by the end of the year. But the outlook quickly shifted as inflation continued to accelerate, reaching 6% in May and pushing the CBR to hike rates more quickly than anticipated – March (25bp), April (50bp)  and June (50bp) – bringing the key interest rate to 5.5% already in June. At the start of the year rates had been predicted to rise by a total of circa 55bp, but now analysts believe the total hikes will be of the order of 125bp during 2021.

The move was widely anticipated by the market, although a few analysts thought the hike could be as much as 75bp, which did not transpire. And the regulator guided for more rate hikes to come, as the balance of risks remained skewed to inflation, in CBR's view.

“Today we have decided to raise the key rate by 50 basis points to 5.50% per annum,” CBR Governor Elvira Nabiullina said in a press conference following the announcement. “Inflationary pressures have increased markedly. This requires us to continue to act actively to ensure price stability. We see the need for a further increase in the key rate at the next meetings.”

Even though the hike was expected, it represents a more aggressive tightening policy by the CBR. Previously in April Nabiullina opted for a "golden mean" interest rate hike, raising the rate by 50bp to 5%, more than expected, and making its second hike of the year on the back of rising inflation and geopolitical worries that seem to have calmed since.

Nabiullina is now signalling her policies going forward by wearing colourful broaches to the press conference. Last month she wore a golden mean broach – a curve drawn through the corners of squares that double in size, a design that was famous in antiquity.

The golden mean stood for a balanced path between extremes. This month Nabiullina wore a leopard broach that had Russia watchers scratching their heads, but given the governor’s love of literature and poetry, some speculated that it was an illusion to Rudyard Kipling's story “How the Leopard got his spots” that indicates the CBR has adopted a new harder policy of tightening for the rest of this year. This month both the CBR and the Finance Ministry have already clearly telegraphed further monetary and fiscal tightening.

The CBR projects that "given the monetary policy stance, annual inflation will return to the Bank of Russia’s target in the second half of 2022 and will remain close to 4%". 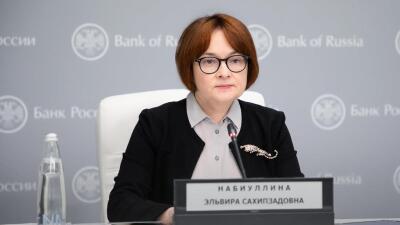 “The Russian economy will return to pre-crisis levels this quarter. In the first half of the year, it is growing faster than we laid down in the April forecast. Already, if we do not take into account the restrictions on oil production and international passenger transportation, output in most basic industries has not only returned to the level of the end of 2019, but also exceeded it. Russia is among the group of countries that will be the first to reach the pre-pandemic level of production,” Nabiullina said.

The bounce-back has been so fast and so strong that some have already talked about “overheating.” Nabiullina said that demand is outstripping supply and companies would need time to adjust, commission new facilities and hire new staff to close the output gap. The domestic growth is benefiting from the tailwind of a global recovery.

“At the same time, demand is growing both domestically and abroad. The strengthening of external demand is underpinned by a faster recovery in the global economy and trade than previously expected. The main reasons are a decrease in epidemic risks against the backdrop of vaccination and extremely loose monetary and budgetary policies in leading countries,” said Nabiullina.

“Aggregate demand is also affected by the increased growth rates of stocks of raw materials and components. First, companies make up for the decline in stocks during a pandemic, during a period of disruption in supply chains. Second, in the light of last year's experience, companies are looking for higher inventory levels to protect against future supply disruptions and further price increases. This does not occur in a narrow group of goods, but in a wide range of production chains,” she added.

She also highlighted several lifestyle changes that were resulting in a boom on the mortgage market and a boom in the sales of electronics for home use.

As soft monetary expansion is not needed to stimulate demand that is already running ahead of supply, any more easing of the rates will only stoke inflation, Nabiullina argued, and the acceleration of demand has already made itself visible in May’s surprise 6% inflation rate.

“In May, the annual rate of increase in prices reached 6%, which is well above the target level. The current inflationary pressures have increased. Thus the average monthly price increase over the past three months (from March to May), adjusted for seasonality, reached a maximum since January 2016. Similar trends can be seen in other indicators of price dynamics that we are considering,” the governor said.

“The fundamental difference between the so-called cost inflation and demand inflation is how it affects the physical volumes of consumption. In the event of cost inflation, that is, a supply shock, prices rise, but consumers are forced to reduce purchases in response. Enterprises are only able to partially transfer their costs into prices, since demand is limited. If both prices and sales volumes grow (and this is exactly the picture we now see in very many market segments), this means that the expansion of demand more than covers the contribution of supply factors. This means that we are dealing with demand inflation,” Nabiullina said.

Moreover, the identification of inflation origins (demand-driven overheating) could imply that CBR expects the CPI trajectory to shift to more than 6% y/y and away from the 4% target in the coming quarters, Sova analysts believe.

Sova expects the most recent economic developments will cause the CBR to raise the key rate another 50bps in 3Q-4Q21 to an eventual level of 6.5% before gradually easing it, starting from 2Q22 as growth momentum stabilises.

"It is extremely hard to distinguish between temporary and sustainable factors behind the current inflation spike, that would make the CBR focus more [on] the running inflation (month on month) to support its decisions in coming months," RenCap believes.

Notably, RenCap analysts note that the CBR was sceptical about the continued dovish monetary policy stance in advanced economies.

In the statement the CBR indicated that “given that the global economic recovery is progressing at faster paces than previously expected and the need is no longer in place for unprecedentedly accommodative policies in advanced economies, an earlier monetary policy normalisation in these countries is possible,” as quoted by RenCap.

Should the US Federal Reserve maintain the accommodative monetary policy in 2021, this could decrease the pressure on the CBR to tighten to policy, in RenCap's view.