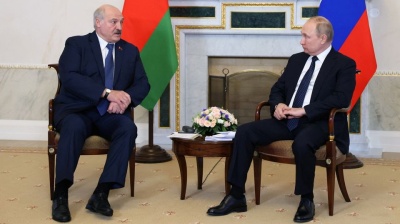 Putin and Lukashenko during their meeting on June 25. / https://www.reuters.com/
By bne IntelliNews June 27, 2022

Yesterday, in the early morning right before the meeting, Russia sent over 40 missiles towards various military targets in Ukraine from Belarusian territory in what Ukraine called a “massive” bombardment.

During the meeting, Lukashenko expressed his “stress” to Putin over US and Nato troop movements near Belarus’ borders. According to Lukashenko, the US and Nato were training crews to use military aircraft with nuclear missile capabilities.

Lukashenko asked Putin to convert the fighter jets currently stationed in Belarus to be able to carry nuclear missiles. However, Putin said that Belarus’ could send their own Su-25 jets to Russia to receive this upgrade.

Instead, Putin promised Lukashenko to transfer Iskander-M missile systems to Belarus, which he said “can use both ballistic and cruise missiles, both in conventional and nuclear versions.”

The Iskander-M is a Russian short-range ballistic missile system that uses both optical and inertial guidance systems. It can carry everything from cluster munitions, vacuum bombs and bunker busters to electromagnetic pulse (EMP) and nuclear warheads up to a range of 500 km.

Belarus removed the neutrality clause from its constitution after a criticised vote was pushed through by the Minsk regime on February 27.

Lukashenko, along with various Belarusian officials, had also expressed openness to stationing Russian nuclear warheads within the country, which has caused many Western leaders and policy makers to fear that this would not just remain simple talk but become a reality.

Barely four months later and the advanced missile systems are now supposed to be transferred to Belarus within months, and this news also comes as independent Belarusian media are noticing a possible restoration of old nuclear-capable facilities within the country.

A few weeks ago, independent Belarusian media reported that Russian and Belarusian military aircraft had been flying to an old Soviet-era launching facility for nuclear and ballistic missiles.

This facility, where the Soviet Union and later the Republic of Belarus stationed a regiment of Strategic Missile Troops (RVSN) between 1959-1996, is today thought to be completely unusable. However, rebuilding and renovation of the existing facility in the coming years could enable Russia to station its nuclear and ballistic missiles there.

During his meeting with Putin, Lukashenko also called Lithuania’s announced blockade of land transit to Kaliningrad “akin to a declaration of war”, further supporting Putin and strengthening his narrative of a Russia under attack, not only for the public but also for Putin himself.

Lukashenko is obviously mad at the West for all the troubles it has cost him with sanctions and support for the opposition. However, during the spring it was believed that he might seek concessions from the West so as not to become too dependent on Putin.

Although he might still not send Belarusian troops into Ukraine, it’s now clear that he is aiming for continued large-scale military escalation with the West.

Putin, on his part, is aiming to draw Belarus as deep as possible into the conflict. On Friday 24 June, Ukraine’s Chief Directorate of Intelligence of the Ministry of Defence reported that Russia had sent “diversionary groups” to the Belarusian city of Mozyr, which is in a region neighbouring Ukraine.

According to the Directorate, these groups plan to bomb apartment blocks, the Mozyr oil refinery, schools and hospitals around Mozyr and then to blame it on Ukraine. The goal of this would be not only to give Lukashenko a casus belli for war, but also to shift public opinion in Belarus to support Russia and Belarus' aggression against Ukraine.

An attack on the Mozyr oil refinery would also bring Belarus closer to complete dependence on Russia for refined oil products, though this would hardly be acceptable for Lukashenko and neither beneficial for Belarus nor for Russia, as the refinery is a cornerstone of the Belarus’ economy.