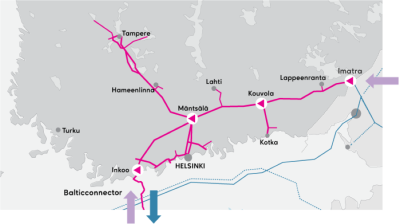 Gazprom, Russia’s state-run natural gas giant, said on Saturday, May 21 that it had stopped all deliveries to Finland as of 6:00 a.m. local time.

Its announcement was confirmed shortly thereafter by Gasgrid Finland, the operator of the Nordic country’s national gas pipeline network. Gasgrid said in a statement that all shipments of Russian gas through Imatra, a town on the border where the Finnish grid is linked to a branch of Gazprom’s Gryazovets-Vyborg pipeline, had been stopped.

Additional confirmation came from Gasum, Finland’s national gas wholesaler. The company said in a separate statement that Russian gas flows had come to a halt on Sunday, in line with earlier warnings from Gazprom Export, the export arm of Gazprom.

The wholesaler also said it did not expect this development to affect deliveries to customers, as it had access to other sources of supply via a subsea pipeline link to Estonia. “Starting from today, during the upcoming summer season, Gasum will supply natural gas to its customers from other sources through the Balticconnector pipeline,” it explained in its statement.

Likewise, Gasgrid said it did not anticipate any difficulties with supplies. In its statement on May 21, it described Finland’s gas network as “in balance both physically and commercially.”

Russia is Finland’s main supplier of natural gas. However, gas only accounts for a small share of the country’s total energy consumption – 6% in 2020, according to a recent report from the Finnish broadcaster YLE.

Gazprom Export’s stated reason for the supply cut-off was Gasum’s failure to abide by new rules payment for gas in Russian rubles. Many observers have noted, however, that the Gazprom subsidiary took action shortly after Finland declared its intention to seek membership in Nato, thereby moving away from its long-standing policy of neutrality vis-à-vis Russia.

Officials in Moscow have warned Helsinki against taking such a step, saying that an application to join Nato would be “a grave mistake with far-reaching consequences” for Finland.