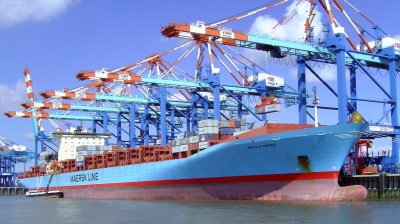 The Istanbul grain deal that allows Ukraine to export to the rest of the world expires on Friday, November 18, but the FT reports Russia is likely to extend it. / bne IntelliNews
By bne IntelliNews November 15, 2022

Russia is expected to extend the Istanbul grain deal signed in July but due to expire on November 17, after it won concessions on some sanctions and an ammonia pipeline running through Ukraine was turned back on, the FT reported on November 15.

The Kremlin has flip-flopped on the extending the period of the deal that allows Ukraine to export its grain from the originally agreed 120 days. Russia had complained that technical aspects of the deal have been ignored, and started to delay the exports by putting up bureaucratic barriers to the obligatory inspections that were part of the agreement.

Russia briefly pulled out of the grain deal in late October before doing an about-face days later after Ankara brought pressure to bear on Moscow not to halt the trade. Most of the grain leaving Ukraine transits Turkish ports, which have become a hub for the global distribution of Ukraine’s grain.

However, sources close to the talks told the FT that an agreement has been reached that allows Russia to get paid for its own exports of fertilisers and other agricultural exports and that an important pipeline carrying ammonia from Russia to Western Europe has been reopened.

The sources said they are confident a new agreement between Russia and Ukraine on grain exports can be reached before this weekend’s deadline. The deal, brokered by the UN and Turkey, automatically renews unless one of the parties objects.

The new deal is also being brokered by the UN and has involved bilateral meetings on the sidelines of the G20 summit currently being held in Bali, Indonesia.

Russian Foreign Minister Sergei Lavrov arrived in Bali for the summit on November 14, but was immediately taken to hospital. In a TV interview with Russian press the Russian foreign minister looked healthy and the next day attended the summit, speaking after Ukrainian President Volodymyr Zelenskiy had addressed the assembly by video link from Kyiv.

Lavrov reportedly left Bali shortly after addressing the summit and holding a meeting with UN Secretary-General António Guterres. Lavrov told reporters that Guterres had given him written assurances of the US and EU’s “good intentions” to remove obstacles to exporting Russia’s grain and fertilisers.

The Kremlin’s tactics with the grain deal have been to use whatever leverage it has to have the sanctions regime eased by squeezing its control over commodity supplies and it has already been successful in forcing the EU to compromise in some areas.

Under the revised agreement being discussed ahead of the weekend’s deadline, Russia will be able to use the same Black Sea route Ukraine is employing to export grain as well as gain permission to use a pipeline that transports ammonia through Ukrainian-controlled territory to a port near Odesa on the Black Sea coast.

Prior to the war the pipeline carried 2.3mn tonnes per year (tpy) of ammonia to clients in Western Europe and brought in $2.4bn in export revenues. Kyiv earns about $100mn annually in transit revenue from the pipeline.

The Kremlin is also demanding that sanctions and a ban on using SWIFT be lifted from the state-owned Russian Agricultural Bank that is the payment agent for agricultural exports, according to the FT sources.

The US is likely to help secure correspondent relationships for the Russian lender at US banks instead of reinstating it to SWIFT, two of the FT sources said.

Lavrov told reporters that the UN has promised that “all the [western] economic operators that participate in Russian fertiliser, grain and supply chains” will not face sanctions for trading in Russian grain, and Russian ships carrying agricultural products will be given access to Western ports and “decent insurance rates”, Lavrov said as cited by the FT.

The UN spokesperson for the Black Sea Grain Initiative Ismini Palla said talks are ongoing on an extension of the grain export deal, and currently the parties have nothing concrete to announce on November 15.

However, she did say that the extension to the agreement to allow Ukraine to continue to export grain was being discussed separately from a deal allowing Russian agricultural exports, adding that the original UN-Russia deal in July were actually two distinct deals.

“In the end Russia blinked,” one person familiar with the talks told the FT. “They moaned and bitched about banking arrangements, but in the end what they really wanted was the ammonia.”

Ukraine and Russia are currently discussing a major new exchange of several hundred prisoners, two of the people said, though any swap would not necessarily be contingent on agreeing the ammonia deal or linked to it.

ISTANBUL BLOG: Erdogan’s talking rate cuts again. There are those who are bored stiff by these joke economics