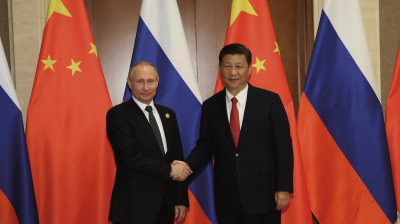 Russia and China have clinched a new gas supply deal, as Moscow doubles down on its pivot towards Beijing against a backdrop of heightened tensions with the West over Ukraine.

Russia’s national gas company Gazprom announced on February 4 that it had agreed on the annual sale of 10bn cubic metres per year of natural gas to China’s CNPC over a 30-year period. The agreement underpins the development of a new export route for Russian gas to China in the Far East.

Russia already pumps gas to China via the Power of Siberia pipeline, which was opened in late 2019. These supplies are sent under a $400bn deal the two countries reached in 2014, not long after ties between Russia and the West collapsed following Moscow’s annexation of Crimea.

While Power of Siberia is filled with gas from onshore fields in Eastern Siberia, the latest contract is for supplies from the South-Kirinskoye field off the east coast of Sakhalin Island.

The deal was signed on the same day as Russian President Vladimir Putin’s arrival in Beijing to attend the 2022 Winter Olympics. Moscow and Beijing are eager to stress their close ties in the face of worsening relations with the US. According to the Kremlin, up to 15 agreements could be signed between the two countries during Putin’s visit.

Russia has been steadily expanding its economic, and more recently, its political ties with China over the past decade, and energy trade has played a main role in this shift. While the EU is still Russia’s top export market, China is in second place, with its imports totalling $79.3bn in value in 2021, according to the Chinese customs agency. Oil and gas accounted for $44.6n of this sum.

Russia has jostled in recent years with Saudi Arabia for the position of China’s biggest oil supplier. Last year, it delivered 1.59mn barrels per day (bpd) of crude, accounting for 15.5% of Chinese imports. These supplies are sent via the Eastern Siberia Pacific Ocean (ESPO). Chinese investors also have a position in Russia’s upstream, LNG and petrochemicals sectors, most notably at Novatek’s Yamal LNG and upcoming Arctic LNG-2 plants in the Russian Arctic.

Russia is also China’s third-largest gas supplier, sending 16.5 bcm of the fuel in 2021, via pipeline and in LNG form, covering around 5% of Chinese gas demand. Gazprom launched Power of Siberia in December 2019, establishing piped gas exports to China for the first time.

Announcing the new deal, Gazprom CEO Alexei Miller said it was “indicative of the exceptionally strong mutual trust and partnership between our countries and companies.”

“Our Chinese partners from CNPC have already seen for themselves that Gazprom is a reliable gas supplier,” he said.

Reuters reported that supplies under the contract would reach a plateau rate by around 2026, which Moscow-based brokerage BCS GM said implied that deliveries would start in two or three years.

“Delivering gas to China’s north-eastern tip makes this project strategically attractive for China, as the only real alternative supply would be more expensive LNG,” BCS GM analyst Ronald Smith said. “The global gas market is very much a seller’s market today, so we expect Gazprom got pricing that is somewhat superior to [Power of Siberia supplies], perhaps with a 9-10% [slope]. This means that if oil is trading at $90 per barrel, the gas will be priced at $300 per 1,000 cubic metres.”

Smith added that the fact that no transit countries were involved, which adds $70 per 1,000 cubic metres in transit charges to Gazprom’s bill in Europe, “the netbacks to Gazprom are quite competitive to typical European prices.”

The challenge for Gazprom will be the timely development of the South Kirinskoye field. The US slapped sanctions on the project in 2015, which will make it harder for Gazprom to access the necessary international technology and know-how to take it into production. Given its vested interest, China is likely to provide support here, and Smith does not expect sanctions to prove an obstacle.

Once the gas is produced, it will be sent to the Chinese border via the Sakhalin-Khabarovsk-Vladivostok pipeline, which is undergoing an expansion to raise its capacity up to 13 bcm per year. This capacity could be taken up to 30 bcm per year if more compressors are added, which would provide room not only for Chinese supplies but also gas for Gazprom’s long-planned Vladivostok LNG plant, potentially. South-Kirinskoye could provide this extra gas, given that plateau production capacity is stated by Gazprom as 21 bcm per year.

One down, two to go

Gazprom is also negotiating a much larger deal to deliver 50 bcm per year of gas to China from Russia’s far north. This gas would then flow through another pipeline built through Mongolia to China. BCS GM is fairly confident that these negotiations will bear fruit, estimating that there is a 50% probability that the agreement will be reached in the next 12 months.

Gazprom first unveiled plans for the pipeline through Mongolia two years ago and completed a feasibility study last year. In the pipeline’s favour is that it has strong support from Beijing. Moscow had previously advocated for an alternative pipeline through the Altai region, but given the long distance it would need to extend through Chinese territory before reaching demand centres, Beijing was cold on the idea.

Critically, this pipeline would connect with the same producing fields as those that currently serve the European gas market. This would significantly increase Moscow’s bargaining position, as it would then be able to agree contracts with buyers either in Europe or in China, depending on who offers the higher price.

There is also a third deal that Gazprom is pursuing. Last year Miller suggested that an additional 6 bcm per year could be pumped to China via the original Power of Siberia.

OPEC+ tiny production increase is a slap in face for Biden