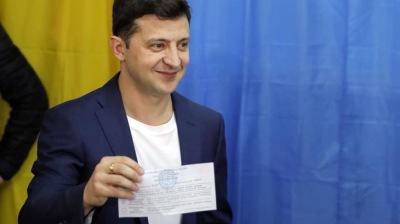 The Kremlin believes that it would be premature for President Vladimir Putin to send congratulatory messages to Volodymyr Zelenskiy on winning the presidential election in Ukraine or to talk about opportunities for collaboration.

"Judgments can only be made on the basis of actual deeds," Dmitry Peskov told journalists on April 22. "Moscow has a respectful attitude toward the Ukrainian people's choice, especially considering that this choice is quite obvious."

Meanwhile, Russian Prime Minister Dmitry Medvedev said the same day that he has no illusions after the election, but believes there is a chance to improve bilateral ties.

"I have no doubt: in regard to Russia the new head of state [in Ukraine] will adhere to the rhetoric that he used during the election campaign. He will repeat the well-known ideological formulas focused on various social groups," Medvedev wrote on his Facebook page, according to TASS.

"I don’t have any illusions about this," he added. "At the same time, there are still chances for improving cooperation with our country."

On April 21, immediately after the publishing of exit polls results, Zelenskiy said his top priority will be to continue "the Minsk [records] direction" to its end for a ceasefire, referring to the peace talks aimed at ending the ongoing warfare in Donbas.

"Besides the Minsk Accords, the number one task for us is to return all war prisoners and sailors," he said. "I will do everything to return our boys home. That’s our priority task."

Zelenskiy said he plans to appoint new people to the positions he is responsible for, especially the prosecutor general. He also said he’s in talks with military generals for new appointments. Zelenskiy will make his first nominations public in the coming week, a spokesman said.

Putin also could be ready to free the 24 arrested Ukrainians sailors as a good will gesture, he said, and the Russian president is also interested in renewing economic relations. Ideally, he wants peace talks to occur between the Russian and Ukrainian diplomats, as well as the leaders of the self-declared republics, Vedvedchuk said.

However, on April 22, Medvedchuk said that achieving peace in the ongoing Donbas warfare will be difficult considering that Zelenskiy has said that he opposes amnesty for the Russian-backed fighters and granting special status for the region, both requirements of the Minsk Accords.

"It’s very difficult so far to say that he will do something for peace," he said, adding that he would offer Zelenskiy support once he "realistically wants peace in Donbas and we see that he is realistically doing something."

Meanwhile, US Special Representative for Ukraine negotiations Kurt Volker believes that it is necessary for Ukraine and Russia "to have direct discussions". "I think his desire to speak to Putin is a good thing, not a bad thing," Volker said during an interview with the US public broadcaster, according to Interfax.

Volker said the new Ukrainian president might open up the possibility for dialogue with Russia. "One hopes that this is, because it's a new president, just an opportunity for a fresh start at dialogue, although it's Russia's position of invading and occupying territory that's really what's needed to change," he said.

Speaking about Zelenskiy's position on ending Russian occupation of areas in Donbas, Volker said,” Well, I think what he's said about the conflict and about his approach is exactly right so far. He strongly supports Ukraine's sovereignty and territorial integrity. He wants to get the land back. He's not going to be giving that way."

Zenon Zawada at Kyiv-based brokerage Concorde Capital believes that Zelenskiy can’t afford to lose his key electoral base, which are the residents of the Russophile Southeast regions.

"In order to gain their support in the October [parliamentary] vote, he needs to demonstrate at least one major accomplishment in his first months as president, which is unlikely to be a Donbas ceasefire," he wrote in a note on April 23. "Zelenskiy would be in a far better position if he dismissed parliament immediately and called early elections, but his advisers said he won’t be doing that. So he will have to cobble together support in the existing parliament in order to pass some major initiatives and gain a strong result in the October vote, giving him a centrist faction committed to pragmatic reforms."