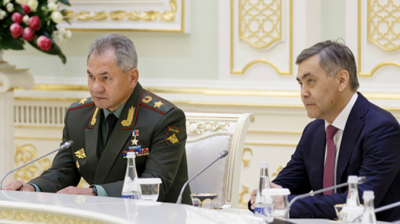 Concerns over Central Asian security have increased in recent weeks given serious fighting between Kyrgyzstan and Tajikistan on their border and the fact that the region is bracing for the Taliban’s reaction to President Joe Biden ordering US troops to leave Afghanistan by September, according to an analyst who focuses on Russia’s foreign and security policy.

Despite Russian officials’ contradictory statements and attitudes on the US maintaining a military presence in Central Asia, Moscow is now taking advantage of the opportunity to bolster its own security there, according to Nurlan Aliyev, a lecturer at the University of Economics and Human Sciences in Warsaw.

Russian Defence Minister Sergey Shoigu recently toured Central Asia, attending a meeting of the Council of Defence Ministers of the member states of the Collective Security Treaty Organization (CSTO), where he mainly criticised the West, stressing that “the actions of the United States and Nato in the European region contribute to the growth of the military danger”. A few weeks later on May 19, Russian Foreign Minister Sergey Lavrov visited Tajik capital Dushanbe to meet with his fellow foreign ministers from CSTO states.

Said Aliyev: “While in Dushanbe, Shoigu held talks with his Tajik counterpart Sherali Mirzo. As a result, the ministers announced the creation of a unified air defence system between Russia and Tajikistan. Since 2009, Moscow has been trying to integrate the air defence systems of Russia and several former Soviet Republics, signing deals with Belarus, Kazakhstan and Armenia.

“Negotiations continue with Kyrgyzstan over the creation of a similar system. Shoigu also said that Russia is ready to increase the number of places for Tajik servicemen in Russian military universities and hinted that the Tajik military will continue to be involved in Russia-led exercises, such as Zapad-2021 scheduled for September. He noted that 500 military personnel currently attend courses in Russia, with a further 1,000 being trained at Russia’s 201st motorized rifle division base in Tajikistan.

“Following Tajikistan, Shoigu visited Uzbekistan where he had talks with the Uzbek Defence Minister Bahodir Kurbanov. Shoigu emphasized that Uzbekistan is Russia’s strategic partner in Central Asia. Developing training programs is a priority for both sides, as highlighted in the  strategic partnership program between Russia and Uzbekistan in the military field for 2021-2025 which was unveiled during the visit. This was the first agreement of this kind to be signed between the two countries.”

“Its implementation will make it possible to give the cooperation a more systemic character, to bring it to a level corresponding to the spirit of our special relations,” Shoigu said, as noted by Aliyev.

Uzbekistan, said Aliyev, has traditionally kept Moscow at arm’s length, joining and leaving the CSTO twice, in 1999 and in 2012. But the two have strengthened military ties since signing an agreement on the development of military-technical cooperation in 2016, he added, also observing: “Rejoining the CSTO does not seem to be on the agenda at present, but may reemerge if the situation in Afghanistan deteriorates.

"Although it is not a member of the CSTO, Russia continues to implement 12 supply contracts with Uzbekistan, according to which, Tashkent receives new radar systems, Su-30SM fighters, Mi-35M attack helicopters. Another major contract regulates the phased delivery of a large batch of Russian K53949 Typhoon armored vehicles. Since 2016, Uzbekistan has been receiving all military products from the Russian Federation at domestic Russian prices, the only CIS country outside the CSTO and the Eurasian Economic Union that has such a privilege. Closer integration is reflected in the production of Russian trucks ‘Ural’ with 4×4 and 6×6 wheel configurations based on MS RemTex LLC in Tashkent.”

According to Russian media and experts, the main reason for Shoigu’s visits to Tajikistan and Uzbekistan was the possible escalation of violent incidents in Central Asia amidst Washington’s decision to withdraw troops from Afghanistan.

“Experts drew attention to the fact that the armed formations of the Taliban and ISIS have already intensified attacks on government troops and representatives of the Afghan government, and there are reports of high-profile terrorist attacks, for instance,  in Logar and Zabul  provinces and in Kabul,” said Aliyev. “According to the Russian media, the escalation of threats and challenges emanating from Afghanistan creates long-term challenges for members of the CSTO. In this regard, the military leaders of the CSTO countries at their meeting in Dushanbe stated the need to consolidate efforts to protect both the national and collective interests of the members of the organization. In particular, they talked about improving the decision-making mechanisms to facilitate a prompt response to threats and challenges related to Afghanistan. However, there are several problems within the alliance, such as Yerevan’s grievances on the CSTO’s lack of involvement in the recent Karabakh conflict and the recent military clashes between Tajikistan and Kyrgyzstan.

“While Russia remains active in patrolling the Tajik border, Uzbekistan and Turkmenistan have jealously guarded their sovereignty from Russian encroachment. However, there are reports that Russia provides military advisors, in some cases even small troops for Turkmen border guards.”

Looking at the Lavrov visit to Dushanbe, Aliyev said that at the meeting of the foreign ministries of Russia and Tajikistan, Lavrov referenced how Dushanbe shares the opinion that the 201st Russian military base on its territory is a significant factor in the stability of Central Asia.

Also according to Lavrov, Russia and Tajikistan will soon sign an intergovernmental agreement, under which the Russian Federation will assist in the construction of a modern border post on the Tajik-Afghan border.

Kommersant said Russia’s top diplomat reminded the Tajik side of what benefits it could obtain from participating in another integration project promoted by Russia, namely, the Eurasian Economic Union (EEU). According to the Tajik foreign minister, a visit of Russian President Vladimir Putin to Tajikistan is scheduled for the second half of September. Dozens of agreements will be signed during it.

“On the one hand,” concluded Aliyev, “the withdrawal of U.S. forces offers an opportunity for Russia to strengthen its role in Central Asia’s security by providing more security guarantees, requesting a firmer pro-Moscow attitude and economic and foreign policy orientation from the Central Asian Republics. Moreover, the security guarantees provided by Moscow will probably have to bring economic benefits for Russia too.”

International transport routes through Ukraine and Russia have been disrupted, and Georgia has become a popular alternative.

Azerbaijani IDPs are eager to return home. But they are uncertain about how their new lives are going to look.

Encounter is “huge” says analyst. However, hopes for a breakthrough in resolving Armenia-Azerbaijan conflict are low.

Each morning, food distributor Suren Bat-Tur goes to the Bars wholesale food market in Ulaanbaatar to purchase produce for resale. Lately, the mushrooms, coriander, tomatoes and other grocery items he buys have hit eye-watering prices.