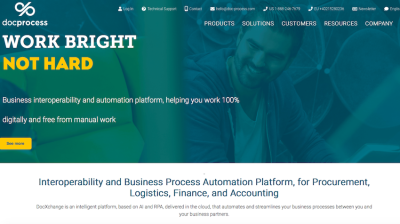 Private equity fund Morphosis Capital has invested into process automation startup DocProcess, the company announced on its blog on September 11.

This was the first deal by the fund, which was set up last year by four Romanian executives who had worked abroad. Its aim is to invest in local small and medium-sized enterprises (SMEs) operating in sectors such as fast moving consumer goods (FMCG), healthcare, and the business to business sector (B2B), Ziarul Financiar daily reported in July this year, quoting Andrei Gemeneanu, one of the four founders of the private equity fund.

The size of the deal was not disclosed, but Ziarul Financiar reported that Morphosis took over “a significant minority stake” in DocProcess. The fund’s representatives confirmed it falls within the target size of between €5mn and €15mn.

“We decided to invest in DocProcess because we see it as the undisputed leader in business ecosystem automation in Romania and a major player in the business automation market.” said Simona Gemeneanu, partner, Morphosis Capital, according to the statement.

“We found an excellent opportunity to partner up with a technology company with a portfolio of products that are proven and scalable; a company founded by two entrepreneurs with a vision and values similar to ours.”

DocProcess is a family business, launched in 2005 by Romanian entrepreneurs Liviu and Daniela Apolozan. The company has 3,200 customers, including large corporations like Carrefour, Altex or Flanco. DocProcess has an office with 40 employees in Bucharest and one of 10 people in Grenoble, France, where a research and development centre is located.

“In March 2018, I opened an office in Grenoble because I already saw DocProcess as a global business. In France, we have a research and development centre that works closely with the Romanian team to innovate and launch new products as we want to develop abroad and even across the ocean,” said Daniela Apolozan.

COMMENT: CEE Fintech Atlas: Some stagnation in the fintech scene, but new vibrant hotspots and opportunity to lift fintech partnership to the next level

The Lithuanian central bank was one of many to be looking at how they might issue their own digital currencies as the use of cash declines – a process speeded up by the COVID-19 pandemic.

Funding will be used for InoBat Auto’s €100mn EV battery R&D facility and production line as it prepares to become the first European supplier of customised EV batteries.

S&T says Iskratel's work in the IIoT software and 5G areas will strengthen its product portfolio.

As businesses re-open their doors across Belarus, they have help from a contact-tracing app based on New Zealand’s successful coronavirus (COVID-19) Tracer app, Kontakkt Space, it was announced in a press release on June 24.