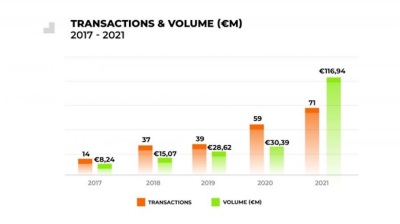 In 2021 the value of the Romanian venture capital market nearly quadrupled to €116mn according to the Romanian Venture Report 2021, launched by How to Web. The number of deals also shot up from 59 to 71.

The biggest investment of the year was FintechOS’ €51mn Series B round, which brought the Bucharest-based fintech startup to a valuation of $220mn.

All in all, in 2021 HowToWeb tracked 18 rounds with over €1mn in funding each, totalling 68% of all transaction volume, with an even Romanian/international capital split.

Even excluding the FintechOS round, the total volume raised has almost doubled from the overall €30.4mn in 2020 and grew by seven times from the €8.24mn volume of 2017.

UK-based Paysend says it wants to help put Belgrade on the map as the next fintech capital of Europe.

Dronamics to scale up its operations and run its first commercial flights out of Malta and Italy later this year.

Ukraine's IT hub is thriving in Transcarpathia

Transcarpathia has become Ukraine’s new IT hub as a cluster of 11 companies has officially begun working in the south-western region, Ukraine Business News reported on May 24.

Iran may be heartbeat away from first unicorn

Ride-hailing app Snapp! said to be near to claiming $1bn valuation.

A media storm erupted in Albania when videos on Tik Tok showed Enkelejda Kapedani posing in designer clothes in her office and driving a BMW.