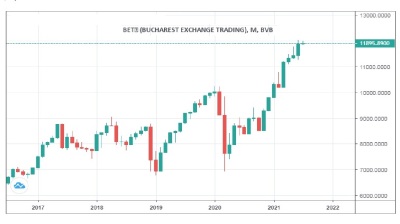 Romania's stock market is on a roll. The index is up over 20% this year, one of the best performing markets in the world.
By Iulian Ernst in Bucharest July 6, 2021

The Bucharest Stock Exchange (BVB) blue-chip index BET has increased by almost 22% since the beginning of this year, double the 10.5% growth recorded by the LSE’s  FTSE 100,  Romania-Insider says in a H1 stock exchange analysis.

There is room for further growth, judging from the ratios at BVB compared to major exchanges in the world - but also looking at the broader macroeconomic fundamentals.

The main drivers for Romania’s stock exchange are the robust economic growth (fundamental driver), the low ratios compared to other exchanges (partly fundamental) and the private funds that resulted in a system by which a certain part of wages are by default poured on the Bucharest Stock Exchange.

The main risks are generated by the global rise of interest rates and a potential sudden global correction that would push up risk aversion and drive out foreign investors.

Apart from this, Bucharest Stock Exchange is thriving thanks to a large number of IPOs and bonds listed - not likely to stir the interest of big foreign investors but enough to totally change the local investors’ sentiment. Although some of the IPOs, particularly in the tech sector but also in real estate (the recent One United IPO), may be regarded as overpriced - but they give a chance to local investors (individual, but also open investment funds) to diversify. On the other hand, local entrepreneurs have an alternative to bank financing, which remains subdued judged from the perspective of bank loans to GDP ratio, despite the short-term positive effects of the government-backed program IMM Invest.

The BET index touched an all-time high level of over 12,000 points on June 28, in line with many European markets that are currently at or close to all-time high or multi-year high levels - driven by exuberance specific for the post-crisis economic cycle, but also by the massive QE that flooded the markets in the past years.

On a one hand, both households and companies are expected to diversify their exposure to different segments of the market, he says.

On a more technical note, he estimates that the BET stock index is severely undervalued in relation to foreign markets. The growth prospects for the domestic capital market in the medium term are also supported by the low level of real financing costs and the very high level of non-governmental deposits, the analyst adds.

From the perspective of PER (price-earnings ratio, or capitalization / profit in the last 12 months), the BET index is strongly undervalued, both compared to the US and German markets and to the Polish market,” Radulescu argued.

At the same time, the BET stock index is also undervalued from the perspective of the P/BV indicator (capitalization/equity). In May, the P/BV indicator stood at 1.1 for the BET index, lower than the levels recorded for the WIG (1.3), DAX (1.8) and S&P 500 (4.5) indices.

“Last but not least, the domestic capital market has the potential for growth and development though cointegration with the real economy, aspect highlighted by the low level of the market capitalization per GDP indicator. Thus, in 2020, the stock market capitalization / GDP indicator in Romania was one third of the level in Poland and approximately one-seventh of the level recorded in Germany ", shows Andrei Radulescu.

The Romanian market is among only seven European markets that have recorded year-to-date increases of over 20% for their top indices, according to TradingEconomics.com data.

Austria has been the top-performing European market in the first half of this year with a ytd increase of 25.6%, closely followed by Slovenia, with 25.4%. The leading pack also includes Bulgaria, Estonia, Iceland and Sweden.

Of the big markets in Western Europe, France and the Netherlands recorded the best performances in the first half, with increases of their main indices of close to 18%. Meanwhile, Germany’s DAX index increased by 14.2%, slightly below the EU average represented by the Stoxx Europe 600 index (up 14.6%).

Malta and Turkey were the only European markets in the red in the first half of this year. Turkey has been struggling with high inflation and high interest rates.

However, the growth recorded by Romanian stocks has also been backed by solid fundamentals as many local companies were undervalued compared to European peers at the beginning of this year.

The BET-TR index, which reflects the total returns offered by Romania’s blue-chip stocks, dividends included, has gained close to 25% since the beginning of this year.

The BET’s top performers in the first half were construction materials producer TeraPlast (TRP), whose shares have gained 127%, followed by nuclear power producer Nuclearelectrica (SNN), up 54% without dividends, medical services provider MedLife (M), up 53%, and winemaker Purcari (WINE), with a 43% increase.