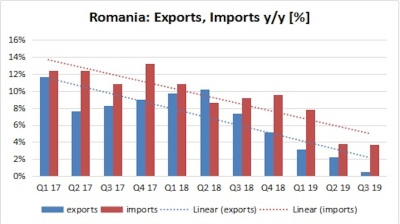 Romania’s exports of goods increased by only 0.5% y/y (to €17.0bn) in Q3, which was the weakest performance in the past seven years, according to the statistics office INS. On a more positive note, the export of services are growing at double digit rates (+14% y/y in January-August) and they account for more than a quarter of the total exports of goods and services thus improving the overall export figure.

While export dynamics remain positive, albeit sluggish, imports are rising at fast rates resulting in a widening external deficit.

Imports of goods increased by 3.7% y/y to €21.3bn in Q3, the weakest rate in nearly seven years but still seven times faster than exports and fast enough to result in an 18% wider trade gap in the quarter. The import of services as of January-August was 18% up y/y, growing faster than exports as well putting pressure on the net export of services that is still balancing part of the net imports of goods.

While there is a broad consensus over the lack of sustainability, it remains unclear how the correction will take place. There is hope that the trade gap is still balanced by the inflows of funds from the European Union budget but even so the current account gap is likely to exceed 5% of GDP this year and remain above this threshold for the coming years.

Central bank governor Mugur Isarescu is constantly ruling out the currency depreciation scenario. The new government has so far ruled out any corrective measure with effects on the households’ incomes. The substitution of imports by local production would restore the balance but the local producers have failed to capitalise on the robust expansion of the domestic consumption over the past years so far.

Czech industrial production down by 25% y/y in May, up 13.8% m/m
2 days ago
Foreigners’ share at Borsa Istanbul falls below 50%
2 days ago
Albania’s annual CPI inflation slows to 1.8% in June
2 days ago
COVID-19 lockdown sends Hungary's industrial output back to 2013 levels
2 days ago
Russia’s Watcom Shopping Index regains three quarters of ground lost to coronacrisis
3 days ago