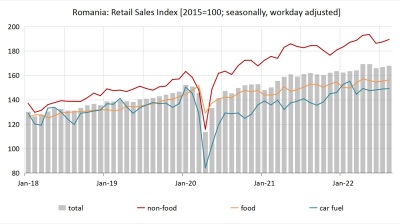 The turnover of Romanian retail trade companies expressed in comparable prices, an indicator for private consumption, increased by 4.5% y/y in August, according to the statistics office INS.

Wage increases (even if not catching up with the prices), pandemic savings, the lifting of travel restrictions and the wave of Ukrainian refugees are visibly pushing retail sales up.

The 4.8% y/y increase of the retail sales index in January-August comes on top of the more than 12% y/y advance in the same period of 2021.

Cătălin Pozdarie, CEO of sports goods retailer Hervis, explained that inflation is still not felt in terms of sales, Ziarul Financiar reported. Sales of clothes and shoes increased by 11%, he said. "I think that in Romania the crisis that is being talked about in the world is not felt. At the moment, the world has barely returned after a well-deserved vacation and I think it still doesn't fully feel the crisis.”

Still bullish retail sales figures are supported by fundamental drivers wages, base effects), but households’ behaviour plays a key role as well. Individuals have very few investment options to maintain the value of their savings that have already shrunk significantly and keep shrinking as the deposit interest rates remain negative in real terms and other safe investment options (open investment funds, pension funds) delivery negative yields after the second slump in just a couple of years.

Food sales rose by 4.0% y/y in August while posting a moderate 2.5% y/y advance for the entire January-August period.

Non-food sales on the contrary rose by  3.2% y/y — significantly slower compared to the 5.0% y/y advance in the ytd period. It is still a robust advance in real terms — particularly compared to the negative real dynamics of wages.

The sales of car fuels are still recovering on a low base: they rose by 7.7% y/y (+8.5% y/y in January-August) despite the high prices.

Adjusted for seasonal and calendar year effects, GDP grew 4.1% y/y, but fell 0.4% from the previous quarter.

Poll shows only one in five Moldovans happy with their government

Poll reveals Moldovans' unhappiness amid rampant inflation and economic hardship brought on by the war in Ukraine.

Data shows rebound, but figures were below expectations as sharply rising prices kept some tourists away.

LNG in Europe: ready or not?

With the reliable supply of Russian gas to Europe a thing of the past since the eruption of war in Ukraine, many European countries have been scrambling to find alternative sources of energy. Many have turned to LNG.

Russia’s GDP at 4.4% decline in October, construction and agro stick out

Hungary’s GDP growth slows to 4.0% in Q3
3 days ago
Poll shows only one in five Moldovans happy with their government
3 days ago
Montenegro’s tourist arrivals almost double y/y in October
3 days ago
LNG in Europe: ready or not?
3 days ago
Russia’s GDP at 4.4% decline in October, construction and agro stick out
3 days ago