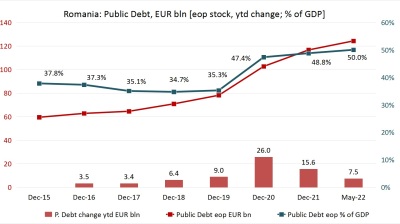 Romania’s public debt reached RON614.3bn (€124.3bn) at the end of May after the government raised €1.75bn in the month with its third series of Eurobonds this year, the finance ministry announced.

The country’s public debt thus increased by €7.5bn in the first five months of the year, half the increase during the whole of last year.

Under the latest projection from the state forecast body CNP, Romania’s GDP will increase by a nominal 16.2% this year.

Based on bne IntelliNews calculations and assuming a constant exchange rate, Romania’s public debt could increase by another RON55bn (€11bn) by the end of the year and the debt-to-GDP ratio would remain at 48.8%, as it was at the end of 2021.

The exchange rate effects are negligible for the local currency’s depreciation in the range of a couple of percentage points as expected by analysts.

bneGREEN: Fit for 55 – not fit for purpose
More pain stored up for Emerging Europe in 2023
French Alten takes over Romanian tech firm Qualitance

Since the war in Ukraine started Russian President Vladimir Putin’s approval rating has shot up and has remained consistently between 82-83%, according to the independent pollster the Levada Centre.

Russia on track to have a record-smashing grain harvest

Russia is on track to smash all previous records with the size of this year’s grain harvest. Russian President Vladimir Putin said that the bumper harvest could be as big as 150mn tonnes this year on September 27.

Consumer prices in the country increased the most for food and transport.

IMF sees Romania’s economy growing by 4.8% in 2022, analysts are even more bullish

Russia’s industrial output decline slows to only 0.1% in August
3 days ago
Poll shows Putin's popularity took hit in September but remained as high as 77%
3 days ago
Russia on track to have a record-smashing grain harvest
4 days ago
Bosnia posts annual CPI inflation of 16.8% y/y in August
5 days ago
IMF sees Romania’s economy growing by 4.8% in 2022, analysts are even more bullish
5 days ago