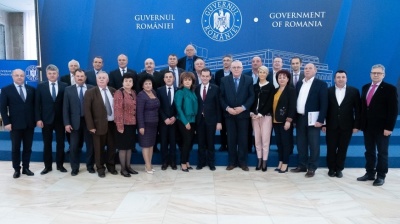 Romania’s new government is preparing a budget revision that is expected to be approved by the end of this week, Prime Minister Ludovic Orban said on November 25, just weeks after his government took office.

Orban said that revising the 2019 budget "is extremely difficult" since the previous government, led by the Social Democratic Party (PSD) left Romania’s public finances in a “dire” situation.

An emergency decree that will include a budget revision should be completed by the evening of November 26, according to the new prime minister. Unofficial sources indicate that the revision will see resources directed to cover the most urgent needs first, with money to be shifted to pensions, wages and local administrations, while investments are cut. In this it will not differ significantly from what the previous PSD-led government was doing.

Then, the government will earmark part of what is left to disburse VAT owed by the state to companies, as the former cabinet delayed such payments. Finally, the money owed to companies for medical leave will also be covered. The National Health Insurance House (CNAS) has been disbursing the money owed to companies for medical leave with a delay of 11 months. The money left will be used to pay for some of the projects financed under various government-funded investment projects such as the National Programme for Local Development (PNDL).

As regards the specific re-allocation of funds, Realitatea Plus quoted by Adevarul daily confirmed that money would be moved from the ministries of education (RON2bn), internal affairs (RON1.2bn), transport and agriculture (RON1bn each) and will be reassigned to the ministries of labour (RON4bn), health (RON3bn), and regional development (RON1.8bn). Romania’s GDP is estimated around RON1,000bn this year.

The government’s budget revision could envisage a deficit of 4.1% to 4.3% of GDP for this year, according to HotNews.ro, quoting sources within the finance ministry.

“We are very sceptical about the capacity of government to deliver such an ample fiscal consolidation in 2020 given the structural forces keeping the public deficit at a high level at the present and the additional upside pressures on public expenses due for next year.”

Part of the resources, to cover the difference between the 2.76% of GDP target deficit and the 4.1-4.3% revised deficit, will have to come from the government’s buffer at the Treasury — a move likely to push up the cost of public borrowing.

The Treasury has already accelerated borrowing, which can only alleviate the expected narrowing of the buffer over the coming months, while the budget for next year remains uncertain and pressure to re-phase the planned pension hikes is mounting.

On November 25 Romania’s Treasury raised significantly more money than planned with the reopening of a bond that matures in September 2023.

Moreover, the Treasury accepted a yield superior to that seen in the last similar move, a scenario that is likely to be repeated in the following months as the government has to finance a budget deficit that will eventually be 1.3% to 1.5% of GDP higher than planned.

The Treasury raised RON1.05bn by selling bonds with a residual maturity of 46 months, more than double versus RON400mn planned. The average yield was 3.92%, up from 3.86% on November 13 when the borrowing cost was pushed up by the comments of new Finance Minister Florin Citu about the hole in the state budget.

In mid-September, the Treasury paid only 3.74% in another re-opening of the same bond maturing September 2023. The latest auction on November 25 was heavily oversubscribed, with the banks placing orders for RON1.86bn worth of bonds, which shows massive liquidity available on the interbank market.

Wages in Romania grow in Q2