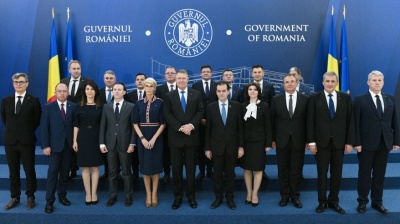 By Iulian Ernst in Bucharest December 2, 2019

Romania’s Finance Minister Florin Citu confirmed over the weekend that the new Liberal government and President Klaus Iohannis are going to observe the wage and pension hikes promised by the former Social Democratic Party (PSD) led government, and will furthermore curb the budget deficit next year — but he deferred once again explaining how this can be done.

The Fiscal Council has said this is impossible, and investors are unlikely to allow the executive more time before pricing in the lack of credible plans for fiscal consolidation.

Romania cannot avoid entering the Excessive Deficit Procedure (EDP), the Fiscal Council officially said in its evaluation of the recent budget revision announced by the government, and the government admitted that it will not be able to exit the procedure next year when it can at best expect a deficit of 3.9%-3.5% of GDP. Therefore, a credible budget is needed not only to maintain investors’ confidence but also as a first step in the process under the EDP.

The exchange rate has already come under pressure after the new government announced the magnitude of the fiscal slippage, but later stabilisation and the stock market’s positive dynamics reflect a certain confidence in the new executive, also reflected by a poll among managers. Even the Fiscal Council treated the budget revision announced by the new government with understanding — while it warned, however, that the next year’s budget must be totally different.

By the end of the year, the new government will come up with the budget for next year, Deputy Prime Minister Raluca Turcan announced over the weekend. It is a tight deadline for Citu, who announced that all the programmes run by the executive (such as Prima Casa for first time home buyers) are currently under review, as well as any other option available for cutting public expenditures or improving revenues. But the end of the year is the most time the new government can afford if it wants to maintain investors’ confidence. Failure to come up with “credible” plans, as required by the Fiscal Council, by this deadline will result in negative effects comparable to those seen exactly one year ago when the former government enacted the emergency decree (OUG) 114/2018.

The Romanian government’s spokesman Ionel Danca outlined a list of measures supposed to bring more money to the state budget in order to pay the higher pensions next year and further increase pensions by 40% in September 2020, but this was far from investors’ expectations.

Out of the measures he outlined, the most credible (in terms of potential extra revenues generated) is increasing VAT collection, but it’s uncertain how much extra money this will bring to the state budget in the short term, and Danca mentioned no specific target. Instead, the government’s spokesperson said that this year’s VAT collections fell RON4bn (€840mn, nearly 0.4% of GDP) below the target. Indeed, the VAT gap is huge in Romania: some €6bn or 3% of GDP according to the European Commission’s estimates, and if reduced by one quarter (to €4.5bn) it could finance the increase in pensions by itself. However, more details on how the government plans to achieve such a target are needed in order to make the plan credible.

The other measures outlined by Danca are small improvements, which might generate some cash nonetheless: downsizing the structure of the public administration (which is politically and bureaucratically complicated), cutting the overhead expenses (partly tied with the former measure), and cutting the cost of public borrowing. The last measure depends on public debt management, but also on investor sentiment.

In the meantime, the Fiscal Council has issued official warnings. The council, in its opinion on the budget revision approved by the government on November 28, strongly recommends the executive that the needed “credible fiscal consolidation” requires a smaller deficit not only this year but also in the medium-term. However, the outlook is significantly impacted by the new pension law, which provides an increase in social security expenditures compared to 2019, of 0.7% of GDP in 2020, 2.7% of GDP in 2021, and 3.7% of GDP in 2022. The Fiscal Council doesn’t think it’s possible for the government to increase its tax revenues by improving collection so fast as to compensate for the pension increases.