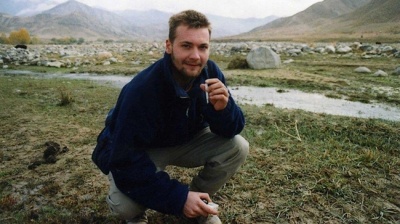 Freelance photojournalist Roddy Scott was killed by Russian soldiers 20 years ago in the Pankisi Gorge. Today a foundation set up in his honour educates children in what is still a hotbed of terrorism and one of the most dangerous places in the world. / bne IntelliNews
By Ben Aris in Berlin December 6, 2022

Twenty years ago the young freelance photojournalist Roddy Scott was killed by Russian forces in the Pankisi Gorge in Georgia. The Chechen war was raging at the time, and the valley had become a refuge for terrorists and a transit point into neighbouring Ingushetia and Chechnya. It was and remains one of the most dangerous places in the world. Scott was 31 years old and killed while filming intense fighting between Russia and Chechen rebels.

Scott was making a documentary about the Chechens' eight-year fight to win independence from Russia and felt strongly that their struggle had been forgotten by the rest of the world. His death put the war back on the front pages of the international press.

Always an adventurer, he spent his student holidays in the Middle East with groups like the Kurdistan Workers’ Party (PKK) that have been dubbed terrorists by Turkish President Recep Tayyip Erdogan and after university travelled widely to hot spots as a freelancer, but made most of his money by updating The World's Most Dangerous Places. At the time of his death he was working for Frontline News, a collective of freelance war reporters that now has a club of the same name in London to support similar freelancers and promote their work. Eight members of Frontline News, including two of its founders, have been killed while reporting from war zones.

Russian soldiers found his body in Ingushetia's Galashki region, near the border with the war-torn republic of Chechnya, where he had been filming a firefight between a Russian unit and a group of Chechen rebel fighters with whom he had been travelling. At least 17 were killed in the exchange and a Russian helicopter was shot down.

Scott had accompanied the Chechen unit as they crossed from the Pankisi Gorge in Georgia into Russia. One report claims he was killed by a bullet in the viewfinder of his camera while filming, but the Kavkaz Centre claimed he was shot while trying to surrender.

Pankisi is home to around 10,000 people, the vast majority of whom are ethnic Kists – cousins of Chechens who have been living in this Georgian valley for centuries.

Since the two Chechen wars in the first decade of this millennium, there has been an influx of fighters and refugees from the conflict into the Pankisi, which is known as a home for terrorists or training guerrilla forces as well as kidnapping for ransom. Throughout the 2000s the valley was one of the most dangerous places in the world and known for being one of the Eurasian centres of drugs, arms and human trafficking.

From 2012, the valley became synonymous with recruitment to radical Islamic forces, particularly those fighting in the Syrian conflict. Hundreds of young men left the valley to fight in these groups, and many of the more experienced fighters joined the most senior ranks of groups such as ISIS, including their Georgian military commander Omar al-Shishani, who hailed from the Pankisi Gorge until he was killed in action in the Middle East.

After his death Roddy’s parents, Robin and Stina, set up the Roddy Scott Foundation charity in 2008 that brings aid to the valley where he died. After travelling to the region and discussing the problems with the valley’s residents they decided education was the most important help they could provide.

The foundation started with a couple of classes in a disused municipal building in Duisi, Pankisi, where lessons still take place today, and became the first aid organisation to provide the local residents with help.

Over the last 14 years the foundation continues to operate, successfully providing English language classes and computer skills lessons to the valley’s children. All teachers are local women with philology degrees (many divorced or widowed), and the foundation is one of the largest employers in the valley.

Students receive three 90-minute English lessons a week, and every year receive some of the highest marks in English in the whole of Georgia in the annual Olympiad, according to the Roddy Scott Foundation.

“Around 250 children are current students of the foundation, which has over 1,000 alumni. In a traditional society with defined gender roles, 70% of our students are girls. We consistently receive some of the best English language results in Georgia. Thanks to those scores, around 80% of our students go to university,” Eleanor Kremers, a member of the foundation, told bne IntelliNews. “Alumni of the Roddy Scott Foundation have won international scholarships, work in companies and NGOs in Tbilisi, Pankisi and around Georgia, and continue to play a crucial role in the progressive future of this region.”

The foundation is privately funded through donations from its supporters. It has a crowdfunding campaign where donors can sponsor a student or contribute to the cost of teaching and transport. More information is available on the foundation’s website.

OUTLOOK 2023: South Caucasus
EBRD invests record €13.1bn into its region in 2022
NEMETHY: Key economic and financial drivers to watch in 2023