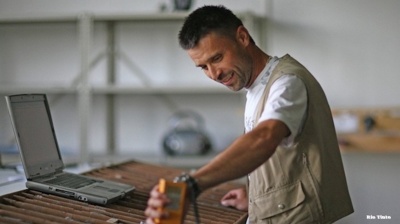 A worker at Rio Tinto's Jadar project in Serbia.
By bne IntelliNews November 17, 2021

Rio Tinto is trying to develop its Jadar project in Serbia — one of the largest greenfield lithium projects in development — but the resistance of the local community to that project is great. If the project goes ahead, it will produce lithium carbonate for batteries used in electric vehicles and other applications.

The $2.4bn Jadar lithium-borates project in Serbia has the potential to produce approximately 58,000 tonnes of battery grade lithium carbonate and position Rio Tinto as the largest source of lithium supply in Europe for at least the next 15 years.

The investment in Inobat Auto, the size of which was not disclosed, follows a memorandum of understanding signed in May, outlining the two companies’ intention to work together to progress the establishment of a “cradle-to-cradle” electric vehicle battery value chain in Serbia.

Rio Tinto has decided to support the completion of a research and development (R&D) centre and pilot battery line in Slovakia's Voderady by InoBat.

“Our Jadar lithium project in Serbia is on the doorstep of the European electric vehicle market. Capable of producing enough lithium to make around one million electric vehicle batteries a year to the highest environmental standards,” Rio Tinto's battery materials business managing director, Marnie Finlayson, said.

The Jadar project in Serbia remains subject to receiving all relevant approvals, permits and licences and ongoing engagement with local communities, the government of Serbia and civil society.