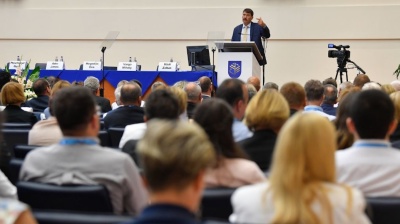 Hungarian banks reported near-record profit in the first half spurred by an upswing in lending, but the branch of networks continued to shrink, local media writes citing data from the Hungarian National Bank (MNB) on September 6.

Banks reported HUF322bn (€0.98bn) in after-tax profit in the first half, down 1% y/y.  Net interest revenue continues to be the main source of profitability. It increased by 10% to HUF617bn in H1, despite declining margins. Against the background of increasing lending, households and companies were net borrowers to the tune of HUF242bn HUF657bn respectively.

Retail lending reached a record high in July as demand for personal loans soared and the government’s new baby-loan scheme could lead to new outlays in the coming months.

Under the central bank’s funding for growth programme (NHP) SMEs signed HUF135bn worth of contracts, 13.5% of the available HUF1 trillion funding from the MNB.

Net revenue from commissions and fees of banks grew by 9% to HUF361bn.

The rise in expenditures is linked to costly projects such as the implementation of the EU’s PSD2 regulatory requirements and investments related to the instant payment services, the launch of which was postponed until March.

Hungarian banks increased their loan portfolio by more than 11% to HUF27.5 trillion. In spite of interest rates close to zero, deposits reached HUF35.2bn, some 80% of their total balance sheet total to HUF44.3 trillion. Debt securities, mostly bonds, accounted for the remaining 20% of banks’ liabilities. Equity was up 13% to HUF5 trillion.

The quality of the portfolios also improved as the non-performing loan (NPL) ratio was below 5%. The NPL rate for retail loans dropped to 8.27% from 11.72% during the period.

Deputy governor of the MNB Marton Nagy called the profitability of the banking systems in the region strong, but questioned their sustainability.

Erste Bank deputy CEO László Harmati stressed the need for consolidation, saying it is not sustainable to operate a universal bank with less than 500,000 clients. Strong demand for the new baby loan could boost lending by HUF300bn at sectoral level in H2.

"This year will be a peak for lending, even without the subsidised loan, but certainly including it," he added.

The current 10-12% return on equity should be stabilised in the bank sector, which is also a benchmark of MNB, opined Jozsef Vida, CEO of Magyar Takarekszevetkezeti Bank.

Flagship holding of Hungary’s number one oligarch wins streak of state orders during pandemic
Hungary’s Wizz Air uses crisis to aggressively take on competition by expanding to new routes
LONG READ: The Growers - a handful of countries in New Europe are coping with the coronacrisis and are still expanding

Foot traffic at Russia’s leading malls jumps as rebound gets underway
4 hours ago
Armenia’s coronavirus plight worsens with more than 1,000 more infections in two days
14 hours ago
Authorities “may be sowing seeds of Turkish economy’s downfall” by pumping money at fastest rate for more than decade
16 hours ago
Turkey’s electricity consumption collapses 17% in May
1 day ago
Russian government presents National Recovery Plan to President Putin
1 day ago